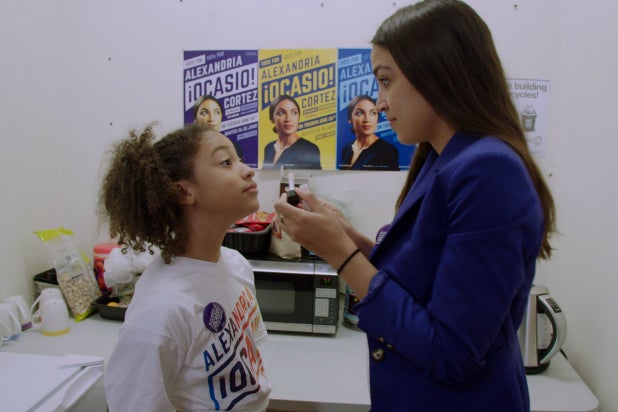 Abolish your suspicions if you are expecting a standard-issue political campaign movie from Rachel Lears’ inspiring “Knock Down the House,” the winner of two audience awards at the 2019 Sundance Film Festival.

Along with her editor and co-writer Robin Blotnick (“The Hand That Feeds”), director Lears (“Netizens”) raises the tired fare’s bar several notches in her powerhouse documentary and puts forth intertwined character studies of four liberal Americans — women who challenged the odds stacked against them leading up to the historic 2018 midterm elections that altered the face of the House of Representatives. Not unlike the candidates it portrays, “Knock Down The House” puts in the necessary work towards a payoff that earns both cheers and tears.

With her name frequently in the headlines and a Twitter follower count in the millions, the larger-than-life, Bronx-born politician in the forefront of Lears’ documentary needs no introduction. She is the 28-year-old U.S. Representative for New York’s 14th congressional district, Alexandria Ocasio-Cortez,  an energized progressive who, from the early days of her fight, deeply recognizes the intersectional biases and difficulties she is up against as a female and a person of color. “For one of us to make it through, a hundred of us have to try,” she says in one of the gloomier moments of the film later on, reminding the audience that she has never been in the race to establish and further her own power, but to lift up the voices of those who think alike but have been pushed to the sidelines.

The other candidates the film follows include Amy Vilela of Nevada, whose plea for a single-payer health care system constitutes the central premise of her movement. We learn that she had tragically lost her 22-year-old daughter when the young woman, who had an undetected pulmonary embolism, showed up at a hospital with urgent symptoms but got turned away when she couldn’t provide proof of insurance. Meanwhile, Paula Jean Swearengin of Coal City, West Virginia, stands up against the cancerous pollution that has long crippled her mining community as well as the various corrupt structures that enable it. There is also Cori Bush of St. Louis, Missouri — a pastor and nurse who volunteered during the Ferguson riots — who aims to better her district’s safety for young men and women.

Instead of displaying information and numeric facts on unimaginative PowerPoint slides and assembling a series of bland talking-head interviews, “Knock Down The House” places the audience inside the candidates’ footsteps. With an intimately inquisitive camera that sympathetically shadows the women’s grassroots campaigns, Lears pulls back the curtain on the politically charged females as they lead by example and instigate their followers to join their cause.

By design (and sometimes to a fault), AOC often takes the center stage to a disproportionate degree. But from the very first moments of the film, one involuntarily accepts this impending imbalance as AOC stands in front of a mirror and gets ready for another hard day’s work. With her effortless reign over the camera, she talks about the all-too-familiar self-presentation challenges career women face with their daily make-up and wardrobe conundrum, when men only have to choose between a suit and a fake-casual persona with rolled-up sleeves.

Lears has invaluable access to the then-waitress’s life with her supportive boyfriend — we get to see AOC serve cocktails and spend excruciating amounts of time on her feet — and her six-month-long campaign during which she wins room after room against the ten-term Rep. Joe Crowley, an established politician who performs a long-standing “absentee leadership” (in AOC’s words) to his New York district while he doesn’t even live in the state.

There is something uniquely stirring about seeing “Knock Down The House” in such close proximity to Betsy West and Julie Cohen’s “RBG,” another emotionally rousing documentary about a trailblazing woman, although one of a different generation. In a way, the two films jointly carve out lessons from the past and offer hope for the future, marking the evolution of fearless voices not intimidated to ruffle some feathers against established, male-dominated power structures.

In that, AOC’s much-publicized victory note that concludes Lears’ film isn’t a fairy-tale ending. No one has superpowers leading up to it. Instead, it’s a celebration of a purposeful, harnessed anger and all the fired-up supporters who believe every course of action, big or small, is a meaningful step towards where we want to be in 2020.