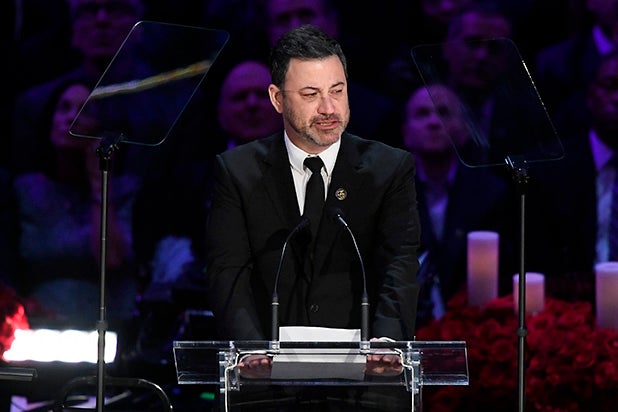 Jimmy Kimmel was the first speaker at the memorial for Kobe Bryant on Monday, delivering a tearful tribute to the late NBA star and highlighting how much his legacy means to fans around the world.

“Everywhere you go you see his face, his number,” Kimmel said from the podium at Staples Center. “Gigi’s face, Gigi’s number. Everywhere, at every intersection. There are hundreds of murals painted by artists who were inspired not because he was a basketball player, but because Kobe was an artist, too.”

“Not just in L.A., across the country in Kobe’s hometown, Philadelphia, in Italy, in India, the Philippines, China, New York, Phoenix, Boston, for God’s sake. In places where he would be booed on the court, Kobe is missed,” Kimmel said.

Kimmel went on to describe the way even Bryant’s rivals felt the shock of his death.

“I’ve been trying to come up with something positive to take away from this and it was hard because there isn’t much,” he said. “But the best thing I was able to come up with is this: gratitude. It seems to me that all we can do is be grateful for the time we had with them and the time we have left with each other.”

Kimmel, who hosted Kobe Bryant on his talk show numerous times and dedicated an entire show to the late player after his death, delivered the eulogy at the top of Monday’s memorial before introducing Bryant’s wife, Vanessa.

Citing the Bryant family’s Catholic faith, Kimmel closed out his speech with a nod to the sign of peace, a regular part of a Catholic mass.

Also Read: How to Watch and Stream the Kobe Bryant Memorial Service

“This is a moment to hug or shake hands with people around you,” Kimmel said. “And it occurred to me that that is something that only seems to happen at church and at sporting events. When perfect strangers who love the same team are suddenly hugging or high five-ing each other.”

He invited the audience at the Staples Center to take the opportunity to do the same and to “be grateful for life and for the fact that we are all here together.”