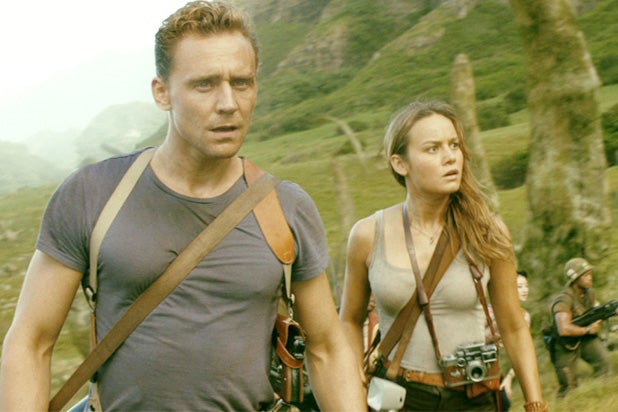 “Kong: Skull Island,” which opens March 10, is the first film in what Warner Bros. and Legendary Pictures intend to be a big-screen multiverse that will include other classic big-screen monsters like Godzilla.

The first part of that new cinematic universe was 2014’s “Godzilla,” with “Kong: Skull Island” being the second origin movie of sorts. Godzilla will return in 2019 with “Godzilla: King of the Monsters” and will meet King Kong himself in “Godzilla vs Kong” a year later.

Given this major franchise setup that’s going on here, it would make sense for “Kong” to include a Marvel-style scene after the credits to tease the upcoming movies. So does it?

Yep. Fans will definitely want to stick around through the bitter end of director Jordan Vogt-Roberts’ new movie for a bonus scene that will give them a glimpse at what’s in store for future movies. (Spoiler alert: Don’t read on if you don’t want to know anything about “Kong: Skull Island.”)

The film follows a team of scientists and soldiers — which includes Tom Hiddleston, Brie Larson, and Samuel L. Jackson — as they trek to the titular island in 1973 to discover whether the myths and legends that surround it are true.

In the bonus post-credits scene, we find Hiddleston’s former British special forces guy James Conrad and Larson’s photojournalist Mason Weaver together in an interrogation room, asking to be let out and promising to tell the Russians — or not tell the Russians — what they had encountered on Skull Island.

Enter two more members of the expedition, scientists Brooks (“24: Legacy” star Corey Hawkins) and San (Chinese actress Tian Jing) who welcome James and Mason to the U.S. government’s top-secret Monarch program — about which we got some clues from expedition organizer Bill Randa (John Goodman) early on in the movie.

“This island is just the beginning,” Brooks tells them, opening a file folder with photos.

“There’s more out there,” San adds.

“This world never belonged to us,” Brooks explains. “It belonged to them. The question is how long before they take it back. Kong is not the only king.”

We then see some grainy “ultra classified” footage from Monarch, the group you’ll recall from that 2014 “Godzilla” that was researching those other “kings.” Most are still images that appear to be like cave paintings of at least four other creatures, including Godzilla himself and his famous past nemeses Rodan, Mothra and Ghidorah. For more on these guys, check out our explainer for the scene.