Cathy Konrad, the accomplished producer behind all three "Scream" films, has sued The Weinstein Company for allegedly developing "Scream 4" behind her back — effectively reneging on an exclusive deal between the parties. 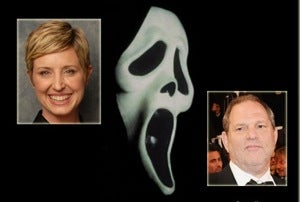 Konrad’s lawsuit, filed Tuesday in Los Angeles Superior Court, says her company, Cat Entertainment Inc., had a first-rights deal with TWC to produce all flims in the horror-spoof franchise.

She contends that the Weinsteins cut her out based on the "false pretext" that her company’s services were supposed to be exclusive to "Scream 4" — which was not a condition on the previous film.

Konrad says that argument was merely a scheme to force her out of the project without payment so TWC could produce the project on the cheap — through "Scream 4" director Wes Craven’s wife, no less.

The lawsuit does not name her, but it does say Craven’s wife, Iya Labunka, has no producing credit on any "released motion picture." She is credited as producer, however, on "My Soul to Take," a film that Craven directed for release later this year; and as an associate producer on "Heathers" and "Stand & Deliver," both from 1988.

What’s also interesting about the lawsuit: Konrad’s filing identifies the Weinstein Company as "successor-in-interest" to all Miramax assets and liabilities, despite that TWC’s deal to buy the studio back from Disney is apparently still in limbo. Does she know something we don’t? (Read: Miramax Deal? Finish already!)

The suit says Konrad learned about TWC’s plans to release "Scream 4" in 2012 through news stories on the internet; that the Weinsteins "concealed all information" about the project; and that their "secretive and furtive behavior" prevented any meaningful discussions thereafter.

The lawsuit said Konrad was directly responsible for the "initiation and development" of the entire "Scream" franchise from the start. Cat Entertainment has produced a wide range of movies and television shows, including "3:10 to Yuma," "Walk the Line," "Girl, Interrupted" and the first three "Scream" films, which her lawsuit contends have more than $480 million worldwide.

The lawsuit alleges breach of written agreement and declaratory relief, seeking reinstatement of first-opportunity production rights for "Scream 4" and subsequent sequels. It does not specify damages, but asks the court to determine compensation at trial.More to come …