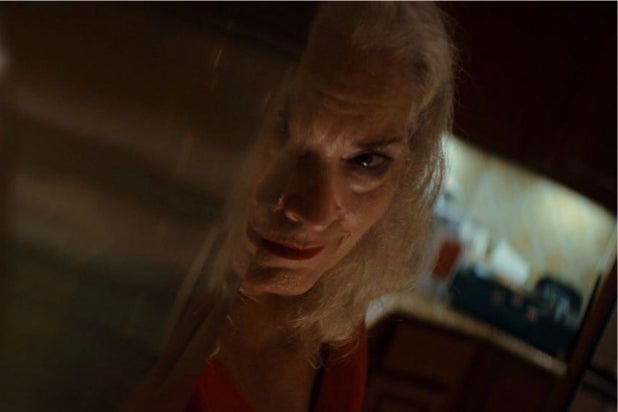 Movies about family dysfunction and holidays are about as cliché as pumpkin pie on Thanksgiving. But “Krisha,” writer-director Trey Edward Shults’ first feature — and winner of the John Cassavetes Award at this year’s Independent Spirit Awards — is an explosive, stomach-knotting debut that’s more “Leaving Las Vegas” than “Four Christmases.”

It also has a distinctive attribute: Many of the actors playing family are related in real life. For example, Krisha Fairchild, who stars in the title role, is joined by three other Fairchilds: her sisters Victoria and Robyn, as her sisters Vicky and Robyn, and her mother, Billie, as her mother. Shults himself, who has a small role here as Krisha’s son, is the actress’ nephew. (Robyn is his mother.)

Also Read: Inside the Spirit Awards: 14 Things You Didn't See on TV

“Krisha” is an impressively molded character study about addiction, self-destruction, and self-hatred. When we first meet Krisha, she’s staring back at us with her bare, lined face and gray curls; soon after, she’s pulling up to a spot on a car-crowded suburban street and trying to find Robyn’s (real-life) home as she talks to herself. You feel Krisha’s anger when she accidentally steps into a puddle, instantly swearing and quietly fuming. Then it’s, “Calm down. Just chill.”

But when you see what Krisha’s walking into, you’ll understand how difficult it would be for almost anybody, especially someone who’s been estranged from her family for 10 years, to step through that door. It’s Thanksgiving, and her extended family is huge, including a few 20-something guys, two brothers-in-law, an infant, and her Alzheimer’s-afflicted mom. The house is carpetless and, as a result, cacophonous, with the guys playing or watching sports and everyone else chattering away. It’s a scene that will make the introverted sink into their chairs. 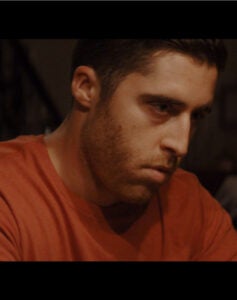 Krisha insisted on making the gigantic turkey — a small attempt to make amends — and once it appears on screen, every viewer can guess what will happen by the time dinner’s ready, although they won’t necessarily predict the roads leading to the Thanksgiving meal, or what happens after it. Despite telling herself to “chill,” Krisha, a clearly deeply wounded woman who claims to be a former alcoholic, becomes increasingly anxious and returns to her guest bathroom frequently to pop pills and eventually chug some wine. “She’s a little jumpy,” someone explains. “She lives by herself.”

The wine scene is preceded by shots of the dusk sky and all the sadness it can imply. And once the bottle is opened, a live version of Nina Simone’s “Just in Time” plays, complete with audience laughter. What follows, a slightly slow-motion pan of the happy family while they wait for the turkey to be done, is mesmerizing, with occasional shots of Krisha almost diabolically smiling.

It’s an unusual musical choice, and not the only one Shults includes: Every now and then there’s a soundtrack of keys, but the notes seem stabbed instead of flowing. The music sets you off kilter, farther kicking you down into Krisha’s black-sheep world. Because you never really learn what Krisha did to estrange herself from her son and the rest of her family, the oddness of the soundtrack as the camera follows her grips you and leaves you wanting to know more.

Although “Krisha” is ultimately a sorrowful film, there’s a bit of humor, too, particularly when Krisha is talking to her brother-in-law, Doyle (Bill Wise). Shults’ writing is vivacious, giving Doyle a unique, charismatic way with words that will have viewers as charmed as Krisha. His sudden change in attitude isn’t exactly realistic, but hearing “Jesus, shithead, get your ducks in a row” almost makes it forgivable.

Melodrama and scenery-chewing are constant dangers with emotional deep-dives such as this one, and “Krisha” does not escape without a little excessive indulgence and a smidge of noticeable “acting.” But considering Shults formed this out of his experience with an addled relative, one imagines that the related actors didn’t have too difficult a time calling up some scalding emotions. All the performances are terrific and lend the film a vérité so keen it may leave you as uncomfortable as the titular outcast.