Anyone who has seen the movie can’t help but notice the ubiquitous presence of sweet treats chain Krispy Kreme, whose fictional store in the “Power Rangers'” made-up hometown of Angel Grove, California, is integral to the film’s plot.

But the ties between the colorful heroes and the doughnuts with their signature glaze goes well beyond simple product placement in the film. Krispy Kreme was also a significant part of the “Power Rangers” movie’s marketing efforts, as TheWrap previously reported.

One of the pillars of Lionsgate’s campaign was a digital world that included a fake online school newspaper for Angel Grove High School. The studio produced four different issues that followed the narrative of the movie’s trailers, and had bonus material only available online.

The Angel Grove paper, “The Roar,” dedicated one of those issues to the destruction of the town’s Krispy Kreme store, complete with quotes from student Billy Cranston, who doubles as the Blue Ranger.

Krispy Kreme also built a dedicated Angel Grove page on its site, complete with an immersive 3D virtual tour of the store built with Matterport’s software. Viewers can toggle between “open” versions of the store and a “closed” version — showing the doughnut shop after its destruction. Clicking through brings up small blue and white dots that allow explorers to interact with items in the store, from job notices posted on the bulletin board to the Krispy Kreme hot light — which brings up a link to download the Krispy Kreme app.

The doughnut chain’s involvement with the film wasn’t limited to the virtual world, however.

“They made a real world announcement where they said they were opening a store in Angel Grove,” Danielle DePalma, Lionsgate’s executive vice president of worldwide digital marketing and research, told TheWrap.

DePalma and Tim Palen, Lionsgate’s president of worldwide marketing,said “Power Rangers” was unique in that its target audience of “rabid fans” included both millennials who grew up watching “Mighty Morphin Power Rangers” in the early ’90s, as well as young kids who watch the current series, “Power Rangers Ninja Steel.”

“I can’t think of ever working on a movie where there was a 25-year fan base,” Palen said.

And to appeal to all ages, naturally, there were limited edition “Power Rangers” doughnuts. Because the only thing sweeter than nostalgia is sugar. 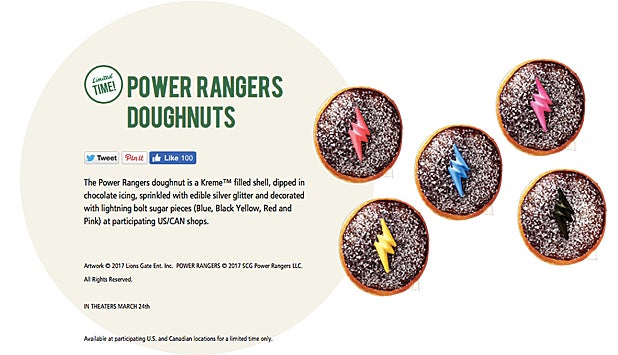 'Power Rangers:' What We Know So Far (Photos)

”Power Rangers“ will be released in the United States on March 24, 2017

Saban’s "Power Rangers" follows five ordinary high school kids who must become something extraordinary when they learn that their small town of Angel Grove – and the world – is on the verge of being obliterated by an alien threat. Here is what we know so far: