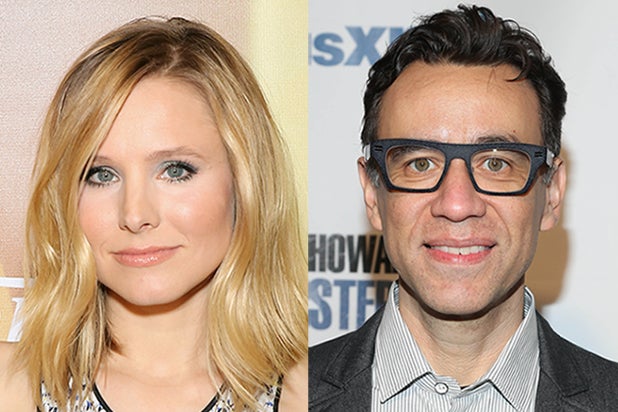 Film Independent President Josh Welsh announced today that Fred Armisen and Kristen Bell will co-host the 2015 Film Independent Spirit Awards. The nonprofit, which also produces the Los Angeles Film Festival and Film Independent at LACMA, will hold the 30th annual awards ceremony as a daytime luncheon in a tent on the beach in Santa Monica on Saturday, February 21 with the premiere broadcast airing live exclusively on IFC at 2:00 pm PT / 5:00 pm ET. Announced earlier, Joel Gallen will executive produce the awards show and producer Shawn Davis returns for his 13th show. Nominees were announced at a press conference on November 25th.

“The only thing better than having a great host for the Spirit Awards is having two great hosts,” said Josh Welsh, Film Independent President. “For our 30th anniversary we’re so excited to have Fred and Kristen co-hosting the awards and it’s going to be a fantastic show.”

Commented Jennifer Caserta, president, IFC, “We’re proud to once again showcase the Film Independent Spirit Awards on IFC and celebrate the 30th anniversary with a live broadcast. Fred is obviously right at home on IFC and we are excited to welcome Kristen to the network. Together, they’ll make this show true event television for our viewers.”

Fred Armisen is one of the most diversely talented performers working today with credits that run from acting, producing and writing in both comedy and music. He is the co-creator, co-writer and co-star of IFC’s Portlandia alongside Carrie Brownstein for which he received an Emmy® nomination for “Outstanding Supporting Actor in a Comedy Series” in 2014 and a nomination for “Outstanding Writing for a Variety Series” in 2012, 2013 and 2014. The show also received the prestigious Peabody Award for excellence in 2011. In February 2014, Armisen was named band leader of the 8G Band on Late Night with Seth Meyers.

An eleven season veteran of Saturday Night Live, he has also appeared in countless feature films including Easy A, The Rocker, Confessions of a Shopaholic, Eurotrip and The Promotion as well as lending his voice to the feature The Smurfs. He has also appeared in the films Tenacious D in The Pick of Destiny with Jack Black, Baby Mama with Tina Fey and Amy Poehler, The Ex with Zach Braff and Jason Bateman, and in Will Ferrell and Adam McKay‘s Anchorman: The Legend of Ron Burgundy.

Bell appeared in a guest-starring arc in the most recent season of NBC’s hit series Parks & Recreation. She also played the lead role in the independent film The Lifeguard, which premiered at the Sundance Film Festival. She also starred in and co-produced the comedy Hit & Run, written and directed by her husband Dax Shepard. Her other film credits include: Movie 43,Some Girls, Writers, Big Miracle, You Again, Burlesque, When in Rome, Couples Retreat, Forgetting Sarah Marshall, Pulse, Serious Moonlight and David Mamet’s Spartan.

The Spirit Awards is the primary fundraiser for Film Independent’s year-round programs. To inquire about individual seating and tables at the Spirit Awards, please contact Jennifer Murby at jmurby@filmindependent.org or 310.432.1253.

For more information on how to support the organization, submission guidelines, voting, media and publicist credentials, and the history of the Spirit Awards, please visit spiritawards.com.