One of the higher profile stories in the weeks leading up to the Sundance Film Festival was the presence of Kristen Stewart in two movies, neither of which featured vampires or werewolves. 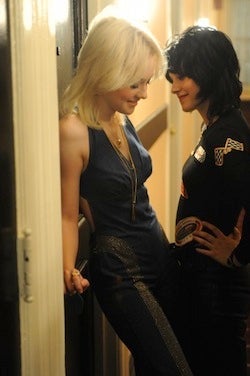 The "Twilight" star has essentially gone back to her roots by appearing in two independent productions, much as she did for several years before getting involved with a big scale franchise.

Unfortunately, the first Stewart vehicle to unspool at the festival did a disservice to her sizable talents: "The Runaways," a biopic about punk rocker Joan Jett, received a lukewarm-to-negative reaction over the weekend (we covered the premiere here). Fortunately, Stewart’s acting abilities are on full display in her other Sundance offering, "Welcome to the Rileys."

Although the plot sounds like the sort of contrived indie misfire that hits the festival each year — a solemn businessman (James Gandolfini), grieving the death of his teenage daughter, takes a troubled girl (Stewart) that’s the same age as his late teen under his wing — a perceptive screenplay and strong performances keep the emotional engagement in check.

As a foul-mouthed underage stripper, Stewart risks making a spectacle of herself, but she remains intriguingly subdued in a manner that lends mystery and layers of depth to her character. Gandolfini, great as always, plays off Stewart’s feigned ambivalence with his most compassionate role in quite some time.

Around the third act, when the businessman’s wife (Melissa Leo) shows up, the three-way synergy of performances works wonderfully in spite of the many cliches. At the 2008 festival, a movie with the same basic plot received tepid reviews and wound up in distribution lingo. It was called "The Greatest," but this version works a whole lot better.

Ironically, "The Runaways" showed up at Sundance with distribution already in place (courtesy of Apparition), while "Welcome to the Rileys" remains on the market. The directorial debut of Jake Scott, it both displays his potential and reminds audiences why Stewart was so alluring in the first place.

It deserves a shot at getting out there. Perhaps, as part of Sundance’s U.S. Dramatic Competition, "Rileys" could lead to an award for Stewart this weekend. Time will tell, but for Stewart, there’s always "Twilight" as a safety net.