A verison of this interview with Krysten Ritter first appeared in The Race Begins issue of TheWrap’s Emmy magazine.

Jessica Jones, the title character in Marvel TV series of the same name, might be a superhero with some special powers — but in Season 2 of the Netflix series, the New York private investigator proved those powers in more ways than one.

After a violent clash in which she overcame her archnemesis Kilgrave (David Tennant) at the end of Season 1, Krysten Ritter’s character spent the second season in a dark place, facing elements of her past that brought out her vulnerability rather than her strength.

How would you describe the change within Jessica from Season 1 to Season 2?
In Season 2, we find Jessica dealing with the aftermath of facing her tormentor and dealing with all of the conflict and internal struggle that comes with that. She’s really battling within herself — did she do the right thing? Or is she a cold-blooded killer? We find her in a pretty dark headspace.

This season, we get to really do a deep dive into Jessica’s past and explore the moments that made her as dark as she is today. We deal with tremendous loss and grief that she carries around and she has suffered because she lost her family — or so she thought.

Spoiler alert: Her mother was not killed in the car accident and in fact she was also experimented on and is a crazy psychopath mass murderer. Just to add conflict for Jessica, someone who has been a loner and an orphan and alone and lonely her whole life, now has her mother back, and unfortunately, her mother is a ticking time bomb.

How do you think the struggle with her mom adds another layer to showing Jessica’s strength, or lack thereof?
While we are introducing this part of Jessica’s past, we see a total different side of Jessica. She is usually so powerful and cool and collected, and this woman really gets into her heart. We really get to see and feel Jessica’s heart and her vulnerability in this season. 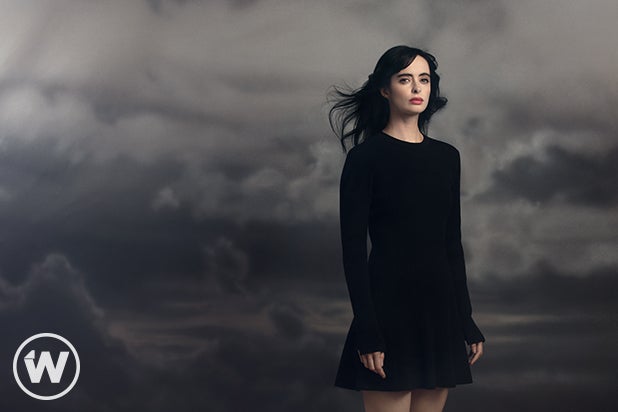 What was your favorite moment of the season?
I have many favorite moments in Season 2. But I get to do great dramatic scenes with Janet McTeer [who plays Jessica’s mother], which might be a life highlight. Working with someone of her talent and caliber was like a master class.

You’ve talked about women coming up to you on the street and telling you how this show represents women in a different light.
I think that Jessica really resonates with men and women, and women in particularly have connected with her in a way that’s really moved me and made this show more than just an acting job. Women will tell me that they’ve had their own Kilgrave or they’ve also suffered sexual assault and they’ve felt so much strength by watching the show. And that has really made me think about the show in a different way.

The show has been praised as a feminist show — do you agree with that?
I think our show is definitely a feminist show. We’re telling Jessica’s story and she happens to be this incredibly flawed, complex, strong, vulnerable woman.

Also Read: Why 'Jessica Jones' Is the Superhero TV Show We Need in the #MeToo Era

Is that what got you interested in the role? Did you always want to do a Marvel project?
I was really looking for a cool, gritty drama and it showed up in the form of “Jessica Jones.” I was really wishing and hoping for a role that I could sink my teeth into. I got to do everything, and I got to do the deep work I got to do on Jessica. And you always want your work to be seen, so having that Marvel logo sure helps.

Do you think this season was important coming out soon after the #MeToo movement started?
I think that people have responded to Jessica in such a big way because we haven’t seen a character like her before. The more complex, messy characters we see, the louder we cheer because for so long the woman has been the girlfriend or the wife or the pretty one or the girl next door or the funny one. And now we’re seeing so many characters. It proves there is a huge appetite.

Look at the success of “Big Little Lies,” “Handmaid’s Tale,” “Wonder Woman,” and even books like “Gone Girl,” “Girl on the Train” … We’re all celebrating these stories because we want to see more complex women. 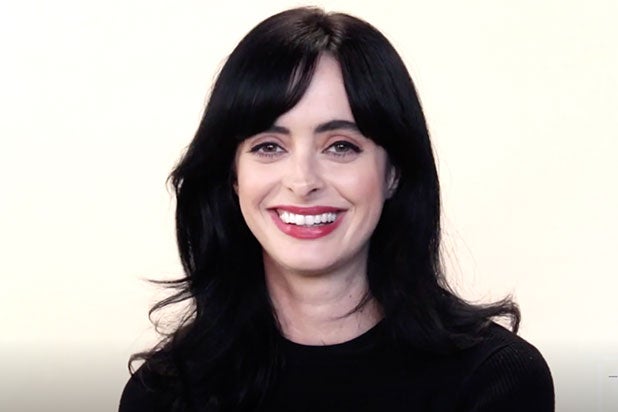 What does Jessica represent that maybe you hadn’t seen on TV before?
I can’t speak for other shows, but I like that she is not glamorous. I like that she says what she wants and she’s not a people pleaser. Think about all the times we say, “Oh, I’m sorry. I’m sorry I’m late, I’m sorry this happened … ” Jessica doesn’t do that, which is refreshing.

She is not full hair and makeup — I barely spend any time in the trailer, I just throw something on. She wears the same clothes because she doesn’t give a s—. There is so much emphasis on being beautiful and having good hair, and good skin, getting your beauty sleep and all of those things and having beautiful heels. This is a character that isn’t doing any of that – she’s doing nothing for any attention whatsoever, not from men or women.

That’s a really refreshing thing and I think it’s an image that I’m really proud of because it’s not based on her body or the way she looks.

Do you ever feel emotionally drained after finishing a day on set?
Yeah, 100 percent. It’s a dark, dark, dark head space to live in. She’s someone who has suffered so much pain in her life and so much trauma and grief and loss and abuse. So that is not a walk in the park. I have things like knitting and I have my cute dog, and I find ways to find levity and balance. And now that I’ve played the character for a while, I’m able to slip in and out easier.