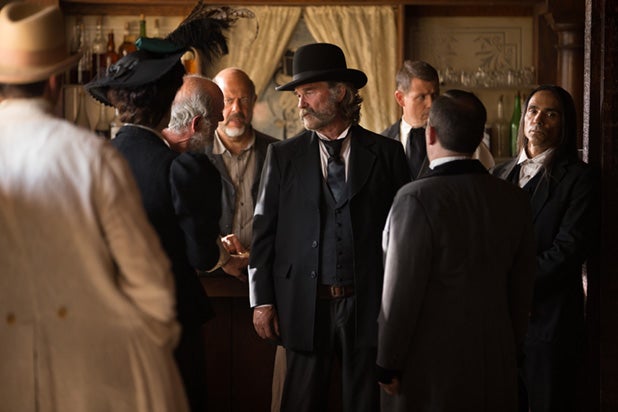 Alamo Drafthouse debuted the first wave of its programming line-up for the 11th annual Fantastic Fest on Wednesday, with the world premiere of  “Bone Tomahawk” starring Kurt Russell set for closing night.

The horror-Western, directed by S. Craig Zahler and starring Russell along with Matthew Fox, Patrick Wilson and Richard Jenkins, follows a group of men who set out to rescue a local woman and a young deputy who’ve been kidnapped by a tribe of cannibalistic troglodytes.

“Bringing Kurt Russell back to the Alamo is something we’ve been trying to do for a long time” said Fantastic Fest founder Tim League. “And to do it with ‘Bone Tomahawk,’ a quintessential Fantastic Fest film, means we’re in for one hell of a closer. Huge thanks to Caliber Media for making it all happen.”

This year, the genre film festival will also include a retrospective of Turkish genre cinema, as well as a gallery event and programming series curated by filmmaker Nicolas Winding Refn ahead of the release of his new book “Nicolas Winding Refn: The Act of Seeing,” which profiles Refn’s collection of vintage exploitation-era American movie posters.

See the first wave line-up below:

Kurt Russell stars in this character driven and at times horrific Western about a group of men (including Patrick Wilson, Matthew Fox and Richard Jenkins) who set out to rescue a local woman and a young deputy who’ve been kidnapped by a tribe of cannibalistic troglodytes.

A young woman slowly goes crazy after taking a job as the caretaker for an ancient New York home in the new film from writer/director Mickey Keating.

The mysterious Dr. Satan’s nefarious plans threaten the future of everyone on the planet, and the only men who can stop him are the brilliant Copperhead and his assistant Sherlock Holmes!

A student rents a room from a family in their converted army bunker, and ends up the tutor to the child and a virtual slave to the parents.

The first movie based on historical facts about the rise and revolt of slavery in America is one of the most brilliant, misunderstood and reviled of all time.

German directors Buttgereit, Kosakowski and Marschall unleash this brutal assault on the senses, a surreal three-part horror anthology touching on love and hate and everything in between.

IN SEARCH OF ULTRA SEX

A pandemic infects people everywhere with infinite lust, and the only ones who can save us are a group of astronauts in space, desperately looking for a solution.

A haunted man attends a dinner party at the house he once called home, and becomes gripped with paranoia that his ex-wife and her new husband are harboring an insidious agenda.

Somewhere in 1970s Budapest, nurse Liza dreams of romance. But as all her suitors die in violent and extreme ways, she begins to fear the worst: maybe she is really a fox fairy, doomed to remain alone forever!

Fantastic Fest staple Shion Sono returns once again with a deeply personal (and expectedly odd) film about a lonely businessman with dreams of punk rock stardom and his best friend, a turtle.

LOVEMILLA is a delightful peek at life and love in Finland, filled with all the usual zombies, black holes, giant pandas and superheros you’d expect from the land that gave us Renny Harlin.

THE MAN WHO SAVES THE WORLD

There has never been and will never be another film like THE MAN WHO SAVES THE WORLD, and your only chance to discover why is at this special Fantastic Fest screening!

A roadhouse hostess goes undercover to investigate the murder of her sister in a little-seen sexploiter from grindhouse rebel and master of erotica Joe Sarno.

OFFICE is the story of Kim, the salaryman who one day brutally murders his entire family with a hammer, and Lee, the put-upon intern at his workplace. It’s dark-as-night corporate satire hiding behind a slasher veneer with scares so well timed, you’ll jump out of your seat non-stop.

Welcome to Turkey. It’s home to Yesilcam, the Turkish Hollywood where, in the late ’70s, dreams were built on nothing more than a dime. Both a loving tribute to the burgeoning cinema of this young country and a trip into history, REMAKE, REMIX, RIP-OFF brings you the most outlandish story you’ve never heard, about filmmaking so dangerous that you need a safety harness just for watching.

Caroline Menard is a woman in her thirties who has lost everything. As she moves into a new apartment searching for a new start, she’s unaware that something ancient is waiting for her.

On a dark and stormy night, eight strangers are stuck in a small bus station waiting for a bus to Mexico City. When strange things start happening, they find themselves trapped in a struggle for sanity and survival.

STAND BY FOR TAPE BACK-UP

Hypnotically scanning the contents of a VHS tape, this experimental essay-film eulogizes the former custodian of the analog artifact, transforming its recordings of GHOSTBUSTERS and FRESH PRINCE (among others) through rap-infused anecdotal narration, and inscribing both profound and hilarious associations to the tracking-lined images. STAND BY FOR TAPE BACK-UP will be presented as both a traditional screening as well as a live performance by creator Ross Sutherland.

TARKAN VS THE VIKINGS

Based on one of the most popular comic strips in Turkey. this rip-roaring adventure sees Tarkan and his trusty wolf companion Kurt take on the despicable Viking invaders after they leave him for dead!

Sebastian Schipper’s fourth directorial work is a single-shot tour-de-force that follows a Spanish barista through a dance club, the streets of Berlin, a coffee shop, a bank robbery and her destiny.

If you did not pack high heels or the correct type of tuxedo (bowties only, no regular ties), then 2015 film festival was "No Cannes Do For You." From secret screenings to jam-packed appearances by Hollywood royalty and British royalty, Here's The Party Report's tourÂ through the bestÂ parties at the Cannes Film Festival.

Georgina Chapman squates for a chat with Duchess Fergie at amfAR on Thursday night, as Zoe Kravitz, Marion Cotillard, and Michael Fassbender wrangle some paperwork. (Sarah Ferguson) What's the best way to keep an advance screening of a hot Jake Gyllenhaal movie leak-proof and crasher free? Screen it at sea. TheÂ Weinsteins revealed "Southpaw," which is already an early Oscar contender, on a yacht Friday night. VIPs like Adrien Brody, who The Party Report last spotted at the Mayweather-Pacquiao fight in Vegas, Michelle Rodriguez, models Adriana Lima and Jourdan Dunn.

Mary J. with the boxer on Friday night. (Getty Images) "I love this film," festival director Thierry FremauxÂ  told the crowd. Gyllenhaal was actually the fest's jury, creating a conflict of interest for a festival slot. Cate Blanchett and Rooney Mara's performances were not the only popular thing about "Carol." Â Their party at Baoli Beach for Todd Haynes' love story drew strong.

Blanchett and Mara; Haynes and costume designer Sandy Powell. (Getty Images) The transformation from restaurant to Riviera chic lounge had more crashers out front trying to get in than any other night. A few nights later in the same place,Â "Sicario" (hitman) was the name on everyone's hit list.

Festival juror Sienna Miller with Camila Alves and Naomi Watts at the "Sea of Trees" party. (Getty Images) It felt a bit more Mexican Riviera than French Riviera at the same spot. Â Fajitas and chili con carne by the sea refueled the "Sicario" crowd, importing the flavor of the Mexican drug cartel film. Emily Blunt channeled Mexico by ditching her heels and going barefoot, before a handler got her some sandals. Josh Brolin was also on the move, emerging from the VIP to mingle, escaping the french security guards around Cannes that Chris Ryan once noted all look like Bond villains. The through line at theseÂ high end bashes wasÂ Le Grand Fizz, a souped up summer recipe of Grey Goose's awards season cocktail program as they hosted several of the top film parties.

Gus Van Sant and Megan Ellison may have been driven to the bottle by the boos for "The Sea of Trees". (David M. Benett/Getty Images) It's France. They have the French flag right there on the bottle. This should not be surprising. De Grisogono founder Fawaz Gruosi flanks new director Natalie Portman at the jeweler's Tuesday night bash at the du Cap. (David M. Benett/Getty Images) The parties came in all sizes, from intimate restaurant bashes like IMDB's and Savannah College of Art and Design's "Ovation for Oscar" to the luxury line bashes.

The Creative Coalition's Robin Bronk,"Everest" producer Lauren Selig, and Jenny Jacobi join IMDB founder Col Needham (right) at Mantel. Delavigne and Didier Drogba, emblematic of the mix of cross-industry celebrity at Cannes. (Getty Images) Global soccer star Didier Drogba made the scene in Cannes, typifying the international, cross-industry celebrity stew at the festival. This was just days before his teammates would carry him off the field in his final game for Chelsea back in England on Sunday, May 24.

(Michael Regan/Sunderland AFC via Getty Images) SCAD toasts the Palais screening of "Ovation For Oscar', a doc about the fashion designer, not the statue. (Luca Teuchmann/Getty Images for SCAD) Two big bashes went head-to-head as Emily Blunt, Rachel Weisz and Sienna Miller were amongst honorees at Calvin Klein's celebration of women in film. Left: The Calvin Klein scene. Right: That is not a maligned french to english translation of Cara Delavigne's name in lights. It was the de Grisogono "Divine in Cannes" decor. (Getty Images) Haim, who have been everywhere in the last month from radio station pop concerts in Carson to the Calvin Klein villa, played at the bashas OthersÂ took boats out to Paul Allen's "Bollywood" themed party on his yacht, Octopus. Paul Allen (2nd from left) played guitar. (Instagram photo credits clockwise from top left: BollingerAmber, SusanRockefeller, Philly_Walsh) The Bond villain clones there would have smashed any overt amateur photography of guests LeonardoÂ DiCaprio, frequent sailor Adriana Lima,Â Cannes jury foreman Ethan Coen,Â John C. Reilly or Amy Poehler, but they could not stop Instagram. The last of the big bashes was amfAR at the Hotel du Cap, raising $30 million dollars as 40 super models walked to the live sounds of Mark Ronson and DiCaprio's own Banksy artwork got auctioned off 30 minutes away from the plebes on the Croisette. It is the kind of crowd that makes Oscar caliber movie stars Â poor by comparison.

Robin Thicke (with April Love Geary) and Richie Akiva at Akiva's 1Oak satellite at club Gotha in Cannes earlier in the week. Richie Akiva's after party in a villa has the crowd ushering the sun back in to the sky one more time in France before heading off to Monaco or retreating back to the U.S. to recover over the long weekend.

The Scene at Cannes 2015: Red Carpet Premieres and Beyond (Updating Photos)