In a now-deleted tweet, former “Mayans M.C.” boss Kurt Sutter accused the network and studio behind the series of changing the ending of Season 2 after he was fired, a move he described as a WGA violation.

“I feel obliged to tell fans that after I was let go, days before it aired, without my knowledge, the [studio and network] changed the ending of the S2 finale,” Sutter wrote. “Beyond the disrespect and WGA violation, the change is dishearteningly indicative of the new regime — they dumbed it down and made it safe.”

Sutter did not specify what changes were made to the episode, which aired on FX on last week. The series is produced by Fox 21 Television Studios. 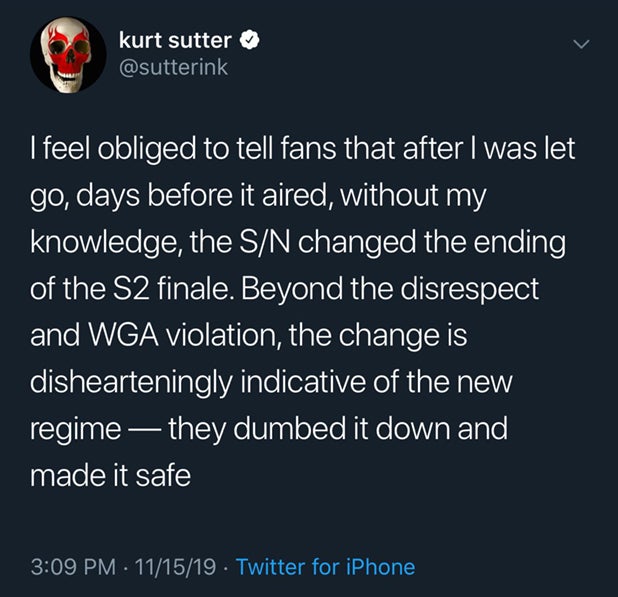 Sutter’s tweet came down less than an hour after it was first posted. It was followed shortly by another tweet, which was also deleted: “Like my final cut of S2, my last tweet has disappeared into unknown mythological ethos. Like all of you, I am terrified. #itsasmallworld,” he wrote.

Representatives for FX, Fox 21 and Sutter did not return TheWrap’s request for comment.

Also Read: Kurt Sutter Explains Why He Was Fired From 'Mayans MC': 'I Went Rogue'

Sutter was ousted from the “Sons of Anarchy” spinoff, which he co-created with Elgin James, last month. It was reported at the time that the reason for his termination was complaints about his behavior from the show’s cast and crew, but Sutter denied that account in a follow-up email to his friends and collaborators. He instead pinned the blame on his unwillingness to cooperate with increased levels of corporate control by executives at Disney.

“The truth is, the suits wanted me gone,” Sutter wrote. “I stepped on toes and bruised egos. And in this Disney regime, I’m dangerous to the wholesome brand. And clearly not worth the trouble.”

Sutter had already been planning to step down from his role as co-showrunner on the third season, announcing at the Season 2 premiere in Los Angeles that he would hand over day-to-day control of the series to James. FX picked up a third season of “Mayans M.C.” with James as sole showrunner earlier this month.