Kylie Liya Page (“The Girl From Plainville”) has joined the cast of “Darby Harper Wants You to Know,” TheWrap has exclusively learned.

The project, a 20th Century Studios film for Hulu, is currently in production. 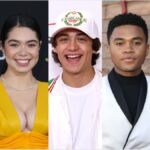 The story follows Darby Harper, who after suffering a near-death experience as a child is granted the ability to see ghosts. To combat the existential boredom of high school, she runs a side business counseling local spirits in her spare time. When an unexpected occurrence happens between Darby and Capri, the most popular girl at her high school, Darby reluctantly agrees to help her and in the process learns how to fit in with the living world again.

Page can currently be seen in Hulu’s “The Girl From Painville,” opposite Elle Fanning. Page stars as Cassie Wilkins, a “friend” from Michelle’s (Fanning) school, though she doesn’t particularly want to be. Cassie thinks she’s a bit of a “try-hard.” Ultimately, Cassie testifies against Michelle in court.

Page was previously seen on the Peacock series “The Girl in the Woods,” directed by Krysten Ritter. During the pandemic, Kylie was seen in Jenji Kohan’s “Social Distance” for Netflix. She starred in the Warner Bros. feature film “Ninja Assassin.” Additional credits include “Friends From College,” “Gossip Girl,” and “Step Up 3-D.”

Page started her career on stage as Young Cosette in the 2014 Broadway revival of “Les Misérables.”