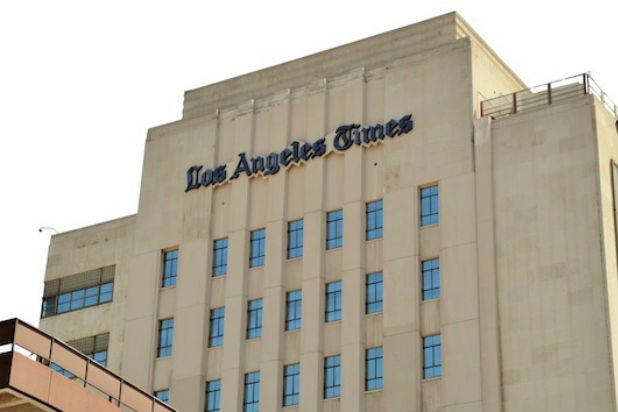 Updated on Thursday, Sept. 10 at 3:25 p.m. PT: Nicco Mele, the Los Angeles Times’ senior vice president and deputy publisher, will be leaving the paper after being hired by Austin Beutner last November. Mele is the third member of the ousted publisher’s executive team to leave in the last 24 hours.

“Nicco gave a lot of people hope about the continued development of the web space, in editorial and production. Back to square one,” an L.A. Times insider told TheWrap.
Renata Simril, the paper’s senior vice president and chief of staff, also informed staff Thursday afternoon that she will be leaving on Friday due to Beutner’s abrupt firing earlier this week, according to Politico.

“I joined Austin and the Los Angeles Times because I believe in the importance of the 4th Estate; to hold power accountable and to be the civic conscious and voice of Los Angeles,” Simril wrote in an email to colleagues. “I believe that this world class city deserves a world class paper; one that inspires, educates and informs.”

On the heels of the abrupt firing of publisher Austin Beutner on Tuesday, L.A. Times vice president of marketing and communications Johanna Maska left the paper on Thursday.

“Johanna is a talented marketing and communications executive and we wish her the best,” Tribune Publishing spokesman Matt Hutchison told TheWrap.

She was one of several high-profile hires made by Beutner in his year as publisher. Her departure shortly after Beutner’s firing hints at a likely domino effect that will purge the Times of most of the executives that he hired.

A new round of buyouts and layoffs is also expected targeting at least 50 staffers.

“I am leaving the L.A. Times with great pride of what we were able to accomplish and an appreciation that this paper landed me in one of the great cities in the world,” Maska wrote in a memo to colleagues.

“The substantive work we did to focus on the community helped to draw on the wealth of passion, diversity and strength that exists across our city and our entire state. It’s my hope that the work continues and The Times continues to innovate in a way that cements it as a dynamic member of the truly amazing community it serves.”

As TheWrap previously reported, Beutner’s ousting comes on the heels of lagging financial results for the paper. Shares in Tribune Publishing have taken a big dip in the last year, down over 50 percent, leaving the company’s market value at $295 million and its stock price at $11 a share.

The L.A. Times is still a behemoth, ranking fourth in daily circulation (489,000 daily readers) after the Wall Street Journal, New York Times and USA Today. But in the last decade, no major daily paper has hemorrhaged readership faster than the L.A. Times; Beutner didn’t stop the bleeding either: daily circulation is down to 489,000 readers compared to 739,147 daily readers in early 2014.

For Tribune, California papers are its heavyweight publishing revenue horses, so removing Beutner is a clear sign the bosses are eager to turn around the paper’s dwindling circulation. The Times and the San Diego Union Tribune represent roughly 40 percent of Tribune Publishing’s revenue and Sunday circulation.