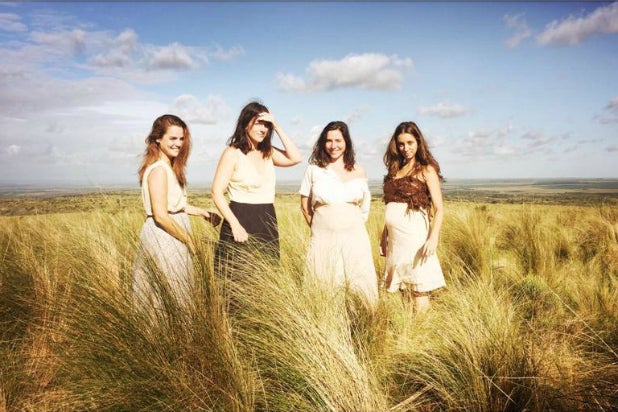 The first thing to know about “La Flor” is that it’s 14 hours and 28 minutes long. The second is that it more than justifies that intimidating runtime, which is divided into six episodes.

Each discrete story unfolds according to the dictates of a different genre, which is to say that Argentine filmmaker Mariano Llinás’ unique achievement is a B-movie, a musical mystery, a spy thriller, a self-reflexive metafiction, a black-and-white riff on Renoir’s “A Day in the Country,” and a vague dramatization of an 18th-century Englishwoman’s account of being abducted by Native Americans — all at once. The same quartet of actresses (Elisa Carricajo, Valeria Correa, Pilar Gamboa, and Laura Paredes) star in all but one episode, lending the affair much-needed continuity.

Llinás himself opens the film to introduce his ambitious project, mapping out the structure on a sheet of paper in a way that explains the title: Four of the stories have a beginning but no end; the fifth, like a short story, has a proper beginning and ending; and the sixth begins in the middle and ends the film. As he illustrates this, you realize he’s drawing a kind of flower — la flor.

Also Read: Here's How 'Homecoming' Pulled Off That Mammoth Tracking Shot in the First Episode

Normally the sight of a filmmaker appearing onscreen to offer a statement of intent would be the height of self-indulgence, but here it’s warranted. “La Flor” is such a singular experience, even in a time when streaming and alternate modes of exhibition have allowed for lines to be blurred and rules to be broken, that having some guidance from the outset is a welcome courtesy.

What follows from there is akin to an anthology film, albeit one made by a single writer-director working with the same principal cast. The individual stories vary a great deal in length — the shortest is a breezy 20 minutes, while the longest is more than five hours — but less so in quality. Llinás’ consistency (to say nothing of that of his four main actresses, whose effort is truly herculean) is hugely impressive.

And lest the runtime lead you to believe that “La Flor” is boring, know that its stories contain everything from mummies and scorpion toxin to spy-versus-spy skullduggery, none of which takes itself too seriously; if anything, the film is a total romp.

For all its enjoyable playfulness, however, “La Flor” can also be too stubborn for its own good. Utterly uninterested in being anything but its sui generis self, it occasionally devolves into insular self-indulgence. There are no grand narrative stakes to these stories, which at their least compelling seem to exist for no other reason than for Llinás’ to prove — to the audience, yes, but also to himself — that he could pull it off.

This is especially true of Episode III, the five-hour espionage drama during which you might finally start shifting in your seat. It’s broken into four parts, with each delving into an individual spy’s backstory, and though it entertains on a moment-to-moment basis, the larger picture it comes together to form is ultimately unsatisfying. The main question anyone curious about “La Flor” will have is, of course, whether it’s worth watching in its entirety. The answer is assuredly yes, but during some moments of Episode III, the motivation may be more akin to Llinás’ than you’d hope: to be able to say you did it.

“La Flor” took a decade to produce, because how could it not, and it’s to Llinás’ credit that watching it very rarely feels as interminable as making it must have. That will be especially true for those who see it in theaters, as most screenings are being divided into four parts for logistical purposes. The last of these feels like an extended denouement, with the “Day in the Country” and abduction episodes having next to no real connection to their predecessors and lasting nowhere near as long. Like some of his viewers, Llinás may have been running out of steam at this point.

When it’s on its game, though, “La Flor” is like nothing else you’ll see this year — or next year, last year, or any other year. It even ends with a 40-minute (!) credit sequence that’s somehow more charming than maddening, which is true of the experiment as a whole. A jumble of voiceover narration, flashbacks, and abrupt cutoffs, “La Flor” is so many things at once that it becomes impossible to accurately describe it as any one of them.

Everything about “La Flor” — that financiers agreed to bankroll it, Llinás and his team were able to complete it, and festivals, distributors, and exhibitors are now screening it — is a marvel. Anyone with a disdain for the studio system’s endless parade of franchises (and with 14 hours to spare) would do well to give it their undivided attention.