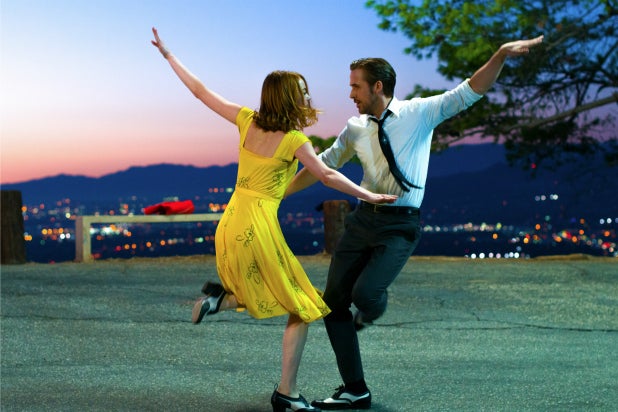 Early reviews for “La La Land” are in, and critics are raving about Emma Stone and Ryan Gosling‘s performances in the musical, claiming, “as a duo they’re close to perfection.”

“Very soon I was utterly absorbed by this movie’s simple storytelling verve and the terrific lead performances from Ryan Gosling and Emma Stone who are both excellent — particularly Stone, who has never been better, her huge doe eyes radiating wit and intelligence when they’re not filling with tears,” wrote the Guardian’s Peter Bradshaw.

TheWrap’s film critic Alonso Duralde agreed: “Even when the orchestra isn’t swelling, there’s plenty to enjoy here. Gosling and Stone’s powerful chemistry is as palpable as it was in ‘Crazy Stupid Love’ — they were that film’s sole selling point — and each of them conveys their character’s love of the arts and drive to succeed. (Stone, in particular, gives great fake-audition to a series of half-interested casting directors.)”

Oscar nominee Damien Chazelle (“Whiplash”) directed the film based on his own script. Gosling plays a jazz pianist while Stone plays an aspiring actress. They fall in deeply in love, but their relationship is tested as they become more successful.

The film also stars Finn Wittrock, Sandra Rosko and John Legend. “La La Land” will be distributed in the U.S. by Lionsgate. The movie will open on December 9.

See seven of the best reviews below.

“These two have been wonderful together before, in ‘Crazy, Stupid Love’ (2011) and ‘Gangster Squad’ (2013), but in ‘La La Land,’ as a duo they’re close to perfection. This movie is purely for them, and they revel in it. You can see it in the way they move and in their singing, too: Stone’s voice is clear and light, like a sliver of morning sun. Gosling’s is soft and dusky, like a moonbeam. They meet in the middle, but not without their share of heartache. ‘La La Land’ is both a love letter to a confounding and magical city and an ode to the idea of the might-have-been romance, in all its piercing sweetness. It’s a movie with the potential to make lovers of us all. All we have to do is fall into its arms.”

“Very soon I was utterly absorbed by this movie’s simple storytelling verve and the terrific lead performances from Ryan Gosling and Emma Stone who are both excellent — particularly Stone, who has never been better, her huge doe eyes radiating wit and intelligence when they’re not filling with tears. Gosling, for his part, has a nice line in sardonic dismissal to conceal how hurt he is or how in love he is … ‘La La Land’ is such a happy, sweet-natured movie — something to give you a vitamin-D boost of sunshine.”

“Starry-eyed and saturated with pure romance, ‘La La Land’ re-visits many of the narrative themes of Damien Chazelle‘s debut, ‘Guy and Madeline On A Park Bench,’ for a jazz-infused, jewel-coloured musical infectiously scored by Justin Hurwitz. Suffused with love — for Los Angeles, the films of MGM’s golden age and Jacques Demy, and its intensely appealing star-crossed leads Emma Stone and Ryan Gosling — Chazelle’s dream-like follow-up to ‘Whiplash’ is as la-la-light as its title, tap-dancing its way into the hearts of incurable romantics everywhere.”

“Sometimes you don’t know what you need until you get it. And the world — as well as cinema, history, art, nostalgia, sincerity, joy, music, love and creativity — needs Damien Chazelle‘s ‘La La Land’ right now. 2016 needs ‘La La Land.’ A primary colored explosion of pure delight that revels in both the manufactured perfections of studio-era Hollywood musicals and in the imperfections and flubbed lines of real life, and finds eternally charming, often spectacular ways to occupy the largely unmapped territory between the two, the film is a huge risk and an absolute triumph. But it also manages to be intimate, to feel like a secret whispered into your ear, and yours alone. And the secret is that while you’ve been living your life and thinking movie musicals were pretty much irrelevant to it, you’ve actually been inside your own musical the whole time.”

“At a party, a screenwriter jabbers at Mia about his latest work-in-progress: ‘a reimagining of Goldilocks and the Three Bears from the perspective of the bears…it could be a franchise.’ That’s the kind of line that should prod at both the hearts and guilt complexes of Academy voters, and is just one of many reasons Chazelle’s film has now screeched into pole position for next February’s Best Picture Oscar. But the joke’s a sincere one. ‘La La Land’ wants to remind us how beautiful the half-forgotten dreams of the old days can be — the ones made up of nothing more than faces, music, romance and movement. It has its head in the stars, and for a little over two wonderstruck hours, it lifts you up there too.”

“The magic takes other frequently and whole sequences tell the story without lyrics, just music and movement and magic and imagination. Jazz, in other words. More importantly, they have real passion and chemistry. You care that they’re together. They’re as fizzy as the old style champagne cocktails which glide diagonally across the screen to represent ‘good times.’ Just as ‘Gladiator’ dusted off the sword and sandal epic, so ‘La La Land’ reinvents the Hollywood movie musical for a new age. It’s an oft-stated theory that the original musicals burst onto the scene during the depression, giving some much needed colour and joy to life. In our current world of terrorism and Trumpian insanity, we can do with some of that Technicolor escapism and it doesn’t come much better than this.”

“As in his previous feature, the Oscar-winning ‘Whiplash,’ Chazelle is trying to get under the skin of his characters and to show just what they have to sacrifice in their pursuit of artistic excellence. At times, it’s as if we are watching two different movies — an escapist musical fantasy and a far darker, earthier drama about a love affair beginning to sour. It’s to the credit of Stone and Gosling that they excel both in the comedic moments and in the more fraught and naturalistic scenes.”