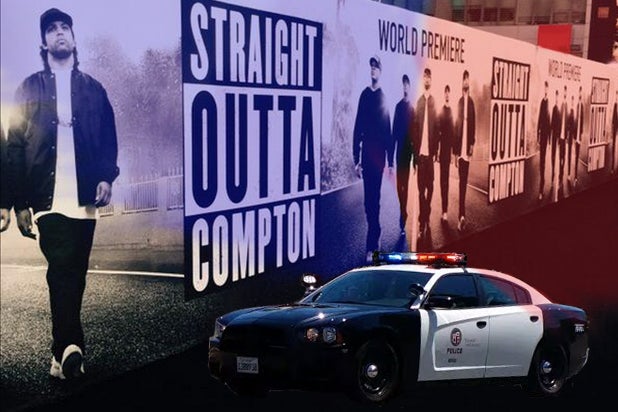 “There will be extra patrols around the theaters, cars and foot patrol. But not only because of the movie that’s coming out, but in light of all the recent activity in the country,” the LAPD insider explained.

That activity includes the recent deadly incidents at movie theaters in Lafayette, Louisiana, and Antioch, Tennessee. Over the weekend, theatergoers in Newport Beach, California, also got a scare when someone brandishing a leaf blower sent patrons running from the building in fear.

Meanwhile, the Los Angeles County Sheriff’s Department — which counts Compton within its jurisdiction — plans to step up patrols around theaters this weekend as well.

“Sheriff’s patrol stations have been working with theater management in their jurisdictions over the last few weeks to develop safety plans and discuss security measures,” public information officer Nicole Nishida told TheWrap. “Deputies will be doing patrol checks during their shifts and the Department will be monitoring the release [of “Straight Outta Compton].”

The heightened police presence comes on the heels of a Thursday pledge from distributor Universal to “support” exhibitors that have requested extra security as they screen the biopic about the rise of gangsta rap group N.W.A (an acronym for Niggaz Wit Attitudes).

The studio declined to comment on what exactly that support would entail, though some media reports have suggested Universal’s help would include financial reimbursement. Still, the studio told TheWrap that it had not specifically directed theaters to increase security, but it has “partnered with exhibitors who have requested support.”

Meanwhile AMC, one of the nation’s largest theater chains, would not specifically comment on its security plans.

“We are anticipating a great crowd for the opening of ‘Straight Outta Compton,’ and similar to every weekend, we schedule and allocate staffing and resources accordingly based on projected attendance.” said Ryan Noonan, director of corporate communications for AMC Theatres.

“Straight Outta Compton” traces the origins of N.W.A, which Ice Cube co-founded in Compton in 1987 along with Dr. Dre, DJ Yella, Arabian Prince, MC Ren and Eazy-E, who died in 1995.

N.W.A sold millions of records and helped put West Coast rap on the map. But the group drew criticism for its explicit lyrics, apparent glorification of gang culture and singles such as the 1988 release “Fu*k tha Police” — an anthem against police brutality and racial profiling.

Neither the law enforcement agencies nor the studio said they expect any trouble, but the enhanced security measures around the release suggest they don’t plan to take any chances.

During the film’s world premiere Monday at the Microsoft Theater in downtown Los Angeles, the LAPD rolled out additional units, including special events officers from its Central Bureau as well as members of its Gang Enforcement Detail.

As for this weekend’s release, it’s evident that police want to be prepared.

“Nothing is expected, this is just a precaution,” the LAPD insider said. “We’re allocating extra resources to make it safe.”