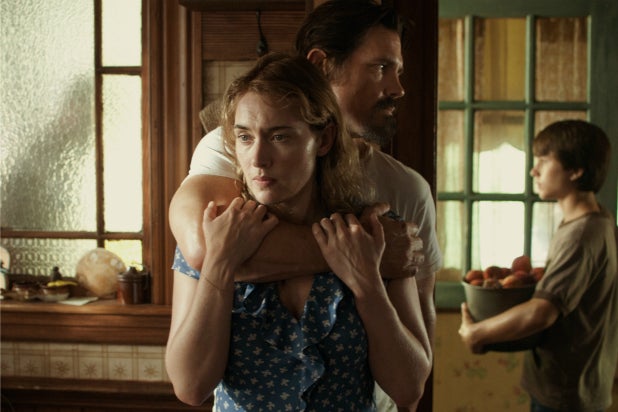 If “Labor Day” teaches us anything, it’s that the line between a prestige-soaked year-end awards bait movie and a Lifetime original with a title like “My Captor! My Lover!” is blurry at best. The latest from Jason Reitman (“Up in the Air”) may have Oscar winners and nominees on both sides of the camera, but for all its ambitions of being a new “All That Heaven Allows,” it can’t quite avoid the stink of Harlequin Romance.

Writer-director Reitman, adapting the novel by Joyce Maynard, gives us a glimpse at the more interesting movie this material might have yielded: The camera tells us almost everything we need to know about the characters’ inner lives, their yearnings and their heartbreak.

Unfortunately, audiences apparently can’t be trusted to pay attention, so Reitman pours on unnecessary narration (provided by Tobey Maguire) that rarely adds anything that the movie hasn’t already told us. Rather than choose to show us or tell us, “Labor Day” all too frequently does both, to the film’s detriment. And if the narration wasn’t enough, Rolfe Kent’s insistent score lets us know exactly what we’re supposed to be feeling every time it comes surging up.

In 1986, Henry (Gattlin Griffith) lives with his severely depressed mother Adele (Kate Winslet), who has never quite recovered from her divorce from Henry’s father (Clark Gregg). Henry does the bulk of the caretaking on her behalf while she exists in a limbo unto herself. (It’s telling that the first time we see her attempt to drive a car, she doesn’t know to take it out of neutral.)

With a new school year impending, and Henry having grown too big for his pants, the two of them make their way to a local department store, and that’s where they meet Frank (Josh Brolin), who convinces them to take him in. Turns out that Frank is a convicted murderer who escaped from a hospital after an appendectomy, and he needs a place to hide out until his suture has healed.

At first, Henry and Adele are terrified, but it quickly becomes clear that Frank has a heart of gold, making himself handy around the house as a fix-it man, surrogate dad (he teaches Henry to play baseball), cook (he whips up a batch of chili, and then later a peach pie in a sequence that does for fruit what “Ghost” did for clay), mechanic and, eventually, lover to Adele.

The reclusive mother and son find themselves willingly aiding and abetting this felon, as flashbacks begin to clue us in more and more about Frank’s unhappy past. Will they run off and form a family together, or will the enclosing arms of the law shatter their dreams of bliss?

“Labor Day” ventures into fairly sudsy territory, and Reitman takes such an unironic viewpoint that it turns the whole thing into a very safe lady fantasy about a brooding stranger with a haunted past who rekindles the fires of love in a damaged (but beautiful) heroine. It’s like “Picnic” with a manhunt, and that damn narration just makes it worse.

Still, the actors are fairly blameless here, doing what they can to turn types into actual characters. Winslet doesn’t overplay the broken-spirit business, and Adele’s blossoming under Frank’s ministrations never plays like a standard issue movie sexual awakening. As the magical fugitive, Brolin maintains an underlying sense of danger for as long as the film will allow.

Beautifully shot by Reitman’s frequent director of photography Eric Steelberg and starring top-flight actors, “Labor Day” clearly intended to be more than the softest-of-the-softcore cry-porn it wound up being. What we’re left with is two-hanky fodder for people who have worn out their “Bridges of Madison County” DVD.