A dearth of film production has driven Ryan Bust, a set dresser based in New Orleans, to several states in search of work on feature films.

He and his wife currently are holed up in an abandoned fire station in Guthrie, Okla., waiting to begin work on Michael Winterbottom’s next feature “Killer Inside Me.” The film, starring Jessica Alba, Kate Hudson and Casey Affleck, was originally slated to begin shooting in January but keeps getting delayed.

“It’s really been bizarre for everybody,” Bust said. “We were called here Feb. 20 to do this movie, and they’ve come up with one excuse after another as to why they can’t start shooting. When it’s a money thing, nobody wants to know.” 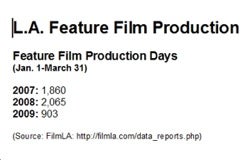 Despite a box office that’s soared 17 percent so far this year, Hollywood’s year-long feature-film production dry spell has turned into a drought, leaving thousands of industry professionals above and below the line scrounging for work.

According to IMDbPro, only 35 films are in production or have filmed in the U.S. since January, an 8.7 percent drop from last year, which was already low because of last year’s writer’s strike.

And the slowdown is bad all over — from L.A. to recent hotbeds of production activity such as Michigan and Louisiana, which offer enormous production tax incentives. 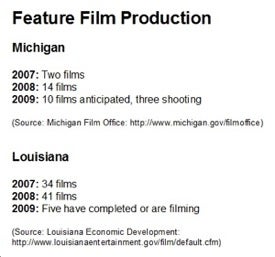 And a $45-million, 500,000 square-foot studio complex recently opened near New Orleans, even though only two films are slated to shoot there.

But only 10 films are “anticipated” to shoot in Michigan — none of which are backed by major studios, according to the Michigan Film Office’s website. And the New Orleans Office of Film and Video lists 13 features — mostly independents — in pre-production, but none currently filming.

In Los Angeles, FilmLA recently reported that off-lot production in the city had its slowest quarter ever during the first three months of this year.

Not even the prospect of a huge summer with studio tentpoles like “Wolverine,” “Star Trek,” “Terminator Salvation,” “Transformers: Revenge of the Fallen” and “Harry Potter and the Half-Blood Prince” can offset the lack of new investors, the worldwide credit crunch and suffering DVD and foreign sales markets.

“A lot of studios have their slates set for next year, so there’s not this rush to production,” said an agent who represents A-level directors and writers, and who requested to remain anonymous. “Over the years, there had been too many films, so while some have done great, others had gotten lost. So a number of studios have cut back their number of films.”

“Studios are saying, ‘We won’t greenlight a movie if we can’t make sure we’ll get our money back. It’s smart economics.”

The Wall Street investors that Hollywood depended on are long gone.

“A year ago there were plenty of hedge funds that were investing money. Money was cheap then. Money is very expensive now,” a studio executive, who requested anonymity, told TheWrap. “Steven Spielberg is the biggest sure bet in our industry. Even he had problems with his financing when DreamWorks left Paramount and went to Disney. It’s not about him. It’s about the financial markets.”

The exec said studios are investing in big tentpole movies that will generate profits and small arthouse films that don’t require huge investments. But the films in between — in the $60- $80-million range — are too much of a gamble.

But another senior studio executive said that there is an upside to the lack of production — fewer films means less competition. "There’s less jockeying for positions, and that always benefits us in the long run," the executive told TheWrap.

One thing that’s for sure: Production won’t increase until the economy recovers. “As the economy picks up there will be more money available to make pictures,” the A-list agent said. “There will be more instances of Summits and Relativities that will come up — that will be the impetus for more production,” he said.

“We are making deals. It’s just that much more competitive and that much harder. Just like everyone else, we’re sucking it up.”

For Ryan Bust, sucking it up has become a way of life. "This has never happened before. We’re just hanging in until things get better."