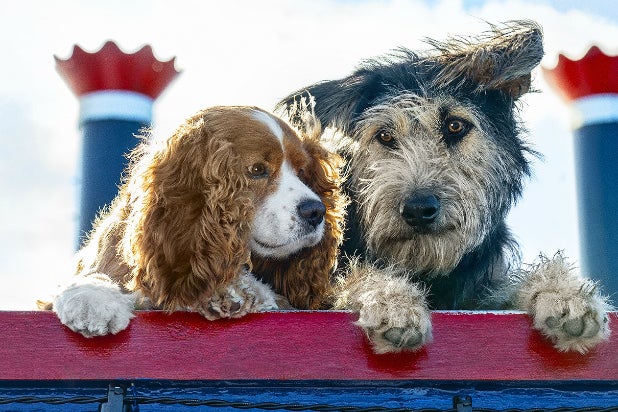 Say what you will about director Charlie Bean’s new “Lady and the Tramp,” but it stands out from the rest of the recent Disney live-action remakes. This isn’t a film that’s been remade to dazzle audiences with big-budget fantasy spectacle. It’s just a story about two dogs who fall in love in backyards and alleyways.

This new “Lady” was probably never going to break box-office records, yet it’s too iconic to go straight to video with the implication that it’s the runt of the Disney live-action remake litter.

So it makes sense that “Lady and the Tramp” will instead debut on the new streaming service Disney+, where its pedigree looks impressive while audience expectations can still be a little more modest than if a hundred dollars had just been plunked down for a whole family’s worth of tickets and a bunch of snacks. In the comfort of one’s own home, Bean’s mostly faithful remake can probably be appreciated for all it is — briefly entertaining and pretty darned cute.

Tessa Thompson provides the voice of Lady, a cocker spaniel who belongs to a kindly upper-crust couple. Jim Dear (Thomas Mann) and Darling (Kiersey Clemons) dote on their dog, but with their first baby on the way, Lady has started to notice that the family dynamic is changing. Like, her walk schedule is thrown completely off. Nobody has ever suffered as she has suffered, surely.

Meanwhile, a nameless stray dog — for the sake of conversation, let’s call him Tramp (Justin Theroux) — is wandering the streets, avoiding a dog catcher (Adrian Martinez, “Stumptown”) who’s weirdly obsessive and always on the clock. Tramp escapes to Lady’s neighborhood and hides out in her backyard, and as they bicker back and forth, he reveals to Lady the shocking truth that she’s no longer the center of her family’s universe.

Tramp is right, of course. The baby is born, and the family leaves Lady with their fussy Aunt Sarah (Yvette Nicole Brown), who brings her two cats into the house. Those cats promptly wreck the place, but Lady gets all the blame. When Aunt Sarah takes Lady to get muzzled, she escapes into the city streets, where Tramp starts to show her the ways of the stray-dog world, and romance finally blossoms over a plate of spaghetti and meatballs.

The live-action “Lady and the Tramp” is extremely similar to the original, but the differences are noteworthy. The world the remake shows us is significantly more inclusive, including the human characters and the animals, and the controversial “Siamese Cat Song” has been replaced with an inoffensive, albeit unremarkable, little ditty about breaking stuff. The plot has undergone minor alterations which contribute little or nothing, but those changes don’t detract from anything, either. As adaptations go, it’s mostly a list of modest improvements and lateral moves.

Whatever cynicism fans of the original — or Scrooges in general — might bring to the film will probably wash away in the first few minutes as a cocker spaniel puppy cuddles its way into our collective hearts. Then again, it might come back when the animals start talking. “Lady and the Tramp” opts for CGI talking animal techniques that range from impressively expressive to somewhat embarrassing. The body language is spot on, but the computer-generated facial expressions are never believable, with overzealous eyebrow movements, glassy eyes and too-wide smiles that aren’t nearly as convincing “Babe” was 24 years ago.

If “Lady and the Tramp” had eschewed cheesy CGI facial animation and instead deployed the same vocal performances over shots of adorable dogs merely standing next to each other, the film might have been more effective. It’s a rock-solid voice ensemble, with Thompson and Theroux offering amusing banter and sweet burgeoning romance, and a supporting cast giving likable comic performances. Sam Elliott, Ashley Jensen, Janelle Monáe and Benedict Wong all play lovable animals, and even Ken Jeong shows up for two lines of dialogue, one of which is hands down the funniest moment in the film.

“Lady and the Tramp” has always been about class divides, and Bean’s version (written by Andrew Bujalski, “Support the Girls,” and Kari Granlund) doesn’t shy away from that conversation. But the messaging is simplistic; ultimately all there is to get out of the film is a modest romantic comedy about mismatched lovers who just happen to be covered in fur.

It doesn’t glitter, it doesn’t explode. It’s just fluffy and sweet. Bean’s film suffers a bit from minor technical issues and, despite a few improvements, it just doesn’t have the same emotional impact as the original, but it still deserves a good home.