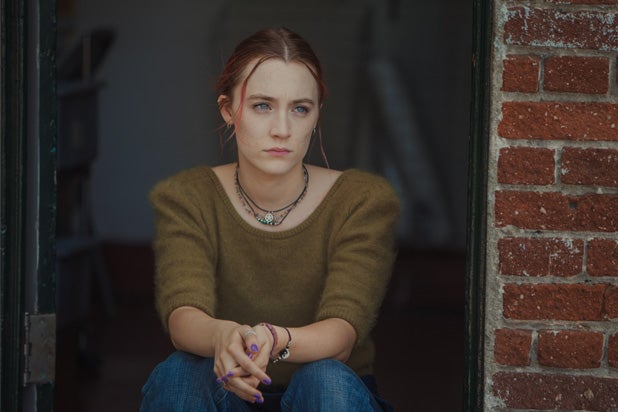 There’s an often-true stereotype about directorial debuts by actors: they’ve got great performances and plenty of moments for a talented cast to make an impact, but such movies don’t yet necessarily reveal any visual flair or cinematic storytelling style.

Stereotypes are made to be broken, of course, or shattered, in the case of Greta Gerwig’s powerful first-time efforts with “Lady Bird.” In her first outing as a writer-director, Gerwig displays not only skill at working with her fellow thespians but also a real understanding of the many tools at a director’s disposal. A quick montage of prayers and pledges of allegiance and scripture readings, for example, captures the Catholic high school experience in about a minute of screen time.

And in much the same way that kindly Sister Sarah Joan (Lois Smith) praises our protagonist Christine (Saoirse Ronan) for a college essay that so skillfully captures the essence of Sacramento, Gerwig and cinematographer Sam Levy (“Maggie’s Plan”) show us California’s capitol in its many facets and shadings. This is a movie about a young girl who wants to get as far as she can from her stifling hometown, but the film itself makes it look like a nice place to grow up.

(Gerwig herself, it should be noted, is a Sacramento native who moved away to New York City, but she insists the film isn’t autobiographical. So be it.)

Christine — but please, call her “Lady Bird” — is starting her final year at a Catholic high school and desperate to go east where, she thinks, all the writers and thinkers are. Her senior-year adventures include shining on her lifelong best pal Julie (Beanie Feldstein, “Neighbors 2”) for popular rich girl Jenna (Odeya Rush, “Goosebumps”); falling in love with drama-club Danny (Lucas Hedges, “Manchester by the Sea”) and sullen rocker Kyle (Timothée Chalamet, “Call Me by Your Name”), both of whom have teen-boy issues of their own; and squabbling with her mom, psych nurse Marion (Laurie Metcalf), who defends her constant (but affectionate) criticism of her daughter by saying, “I just want you to be the best version of yourself that you can be.”

With dad Larry (Tracy Letts) between jobs, much of the conflict between Marion and Christine comes down to money. In fact, the economy pervades much of “Lady Bird” (which is set during the 2002-2003 school year), from worries about paying for college to Danny discovering that Christine is being literal when she describes her family as living on the wrong side of the tracks. There’s some “Pretty in Pink” happening here, but filtered through Nicole Holofcener and the Dardenne brothers.

Not surprisingly, the acting here is consistently superb, from Ronan adding another wonderfully complicated character (with a perfect American accent) to her repertoire to a supporting turn from Metcalf that gives her the rare opportunity to dig into her talents on the big screen in the way she gets to on stage and television. As a writer, Gerwig is humane and generous, giving even sideline oddball characters their own moments to show depth and compassion while still being eccentrically amusing.

In films like “Damsels in Distress” and the sublime “Frances Ha,” Gerwig the actress skillfully pivots between the wacky and the poignant, so it’s no surprise that Gerwig the auteur so delicately balances hilarity and heartbreak. Life and love and money can grind you down, “Lady Bird” notes, but there’s always a tearful sing-along to a pop hit or a shopping spree for items you have no intention of actually buying to make you feel better.

As we follow Christine through the highpoints of a key year in her life — Christmas, prom, the school play, Ash Wednesday (it’s a Catholic school, remember?) — we get to see that cusp where a self-involved teenager starts taking those tentative first steps to being an adult, and seeing the world through grown-up eyes. Gerwig has an eye for every step of this character’s journey, and in so doing, sets out on her own path toward what promises to be an exciting directorial career.