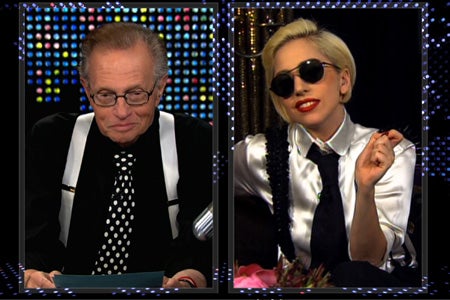 Larry King — whose show has become something of a safe haven for music stars of late — had Lady Gaga on recently. During the interview, which airs Tuesday, Gaga says she was supposed to open for Michael Jackson on his "This Is It" tour. Oh, and she has tested "borderline positive" for lupus.

Video and a partial transcript, via CNN:

Larry King:  There’s been a lot of stories, and stories so often wrong, about your health.  How are you?

Gaga: I’m okay. Thank you Larry, how are you?

Larry King: I’m okay.  But, I mean you look great.  Is there any, there was a story about lupus or something.  Do you have lupus?

Gaga: Um, you know lupus is in my family and it is genetic and um.  It’s funny because my mother told me the other day that my fans were quite worried about me because I did talk about the fact that I was tested for lupus.  And the truth is I don’t show any signs, any symptoms of lupus. But I have tested borderline positive for the disease. So, as of right now I do not have it, but I have to take good care of myself.

Larry King: Is it true that Michael Jackson wanted to perform with you on his “This Is It” comeback tour?

Gaga:  You know it’s always very difficult because I don’t necessarily like to talk about those very personal things that happened, but I guess I can speak about it now.  I was actually asked to open for Michael on his tour, and we were going to open for him at the O2 and we were working on making it happen, and I suppose, I believe that there was some talk about us and lots of the openers doing duets with Michael on stage. But Michael’s death was devastating for me regardless of whether or not I was supposed to go on tour with him.  He is such an inspiration and remarkable human being.  I guess I suppose Larry, some of my fascination with death and the demise of the celebrity goes along with me watching these hugely iconic and amazing people that I have heralded and admired my whole life become destroyed, whether self – destroyed or destroyed by the media.

Mick Jagger Wants to Test Drug Legalization on an Island