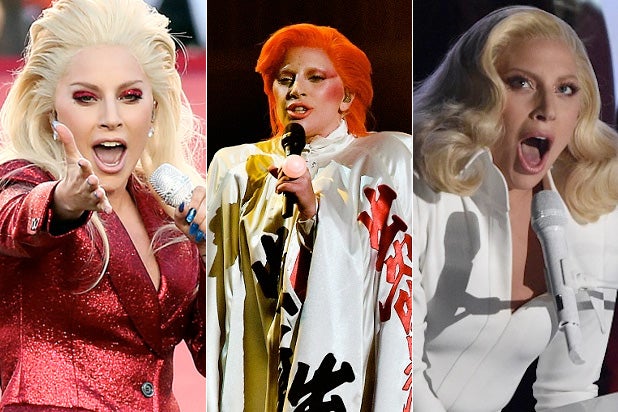 In a February filled with big TV and social-media moments, perhaps no one had more of them than Lady Gaga, according to Twitter data gathered by Nielsen and analyzed by Canvs.

Gaga has always had her passionate “little monsters,” as she calls her fan base (including more than 56 million followers on Twitter and 15 million on Instagram).

But in February of 2016, the artist born Stefani Germanotta came out from behind the chameleonic fashion and makeup looks with a string of appearances at major events that set Twitter users to tapping: singing the National Anthem at the Super Bowl, paying tribute to the late David Bowie at the Grammys and performing her nominated song “Til It Happens to You” at the Academy Awards.

In each of these events, three of biggest events on TV (and now Twitter) every year, Gaga scored considerable reaction.

She had a lot of competition for attention from the game, the $5 million commercials and even the all-star lineup of musicians at halftime, including Coldplay, Bruno Mars, Beyoncé and Mark Ronson. Regardless, Gaga still was the 15th-most-cited term at the event, singing before the game had even started and most fans had settled into their seats.

Lady Gaga is gradually starting to grow on me. Good set of pipes!

Props to Lady Gaga. She crushed it out there. #SB50

Honoring David Bowie at the Grammys

Gaga was chosen to honor David Bowie at the Feb. 15 Grammys, which came just a few weeks after the legendary star’s death from cancer.

The Grammys drew nearly 2.7 million Emotional Reactions among 7.6 million tweets. On a night when Taylor Swift subtly rebuked Kanye West, Kendrick Lamar invoked #BlackLivesMatter in a highly political performance and Adele had a microphone mishap, “Lady Gaga” was still cited in about 2 percent of all tweets about the Grammys.

The responses to her performance, in makeup and outfit explicitly invoking Bowie’s Ziggy Stardust persona, were largely positive, too, with more than 52 percent either expressing “Good” or “Love.”

Stoked to see @ladygaga do a @DavidBowieReal tribute. #cantwait #Grammys2016

Gaga’s intensely passionate and personal performance of “Til It Happens To You,” a ballad about sexual abuse co-written with eight-time Oscar-nominee Diane Warren, attracted some of the biggest Emotional Responses of Oscar night, according to Canvs.

About 58 percent of tweets expressed either “Love” or “Good” reactions. The emotion “Crazy” spiked around “performance,” referring to Gaga’s singing while surrounded by other victims of sexual abuse, most with simple, searing statements written on their inner arms. Posts that included her name comprised 3.1 percent of the 2.4 million Oscar-related posts, with more than 75,000 Emotional Reactions.

It was one of the biggest reactions of the night, though well behind the explosion of tweets after Leonardo DiCaprio finally won an acting Oscar after five nominations.

It’s so, so important that awareness is being brought to sexual assault and consent. Also, Lady Gaga‘s performance was so powerful. Wow.

After her Oscar performance, Gaga (who has talked about her own experiences as a victim of abuse) posted several photos on Instagram. It set off another round of posts about Gaga, her relationship and her performance.

After my performance last night I felt a weight lifted. Like I didn't have to hide anymore. looks like my outfit and this photo felt what I was feeling @brandonmaxwell @markseliger

I never thought anyone would ever love me because I felt like my body was ruined by my abuser. But he loves the survivor in me. He's stood by me all night proud and unashamedly. THATS a real man. ❤️

21 Best and Worst Oscars Moments of 2016, From Sarah Silverman to Lady Gaga (Photos)

WORST: The introduction clip for the show -- you know, the one that sets the tone for the show and gets viewers into the mood -- started with a cheesy clip of all the ingredients that go into an Oscar, like heart, passion and inspiration. And just so viewers get the idea, the ingredients were then funneled into the Oscar statutes in pixie-dust form.