Shooting the thriller “Lakewood” had Naomi Watts really working on her cardio, as director Philip Noyce says that the actress had to run as much as 2 miles in a single take as part of her role in the one-woman thriller.

Shot in rural northern Ontario during the pandemic, “Lakewood” follows Watts as a mother who risks her life to save her child after her small town is placed on lockdown over a school shooting. Much of the film shows Watts running through forest roads to get to the school, which Noyce says became very physically grueling for her.

“There were 11-minute takes where we are all in cars or getting pushed or pulled in front of her but she had to keep going,” Noyce told TheWrap’s Toronto International Film Festival studio. “Another actress might not have been able to turn that negative, the absolute exhaustion, the fear of injuring herself, the confusion of which of the 11 pages she’s shooting that day. Naomi, being that kind of can-do person, turned it into a positive. The confusion and the desperation was real becasue she was exhausted and in pain.” 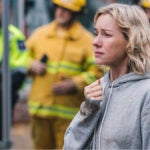 Another challenge of shooting was that the takes took so long and involved so much running to begin with that Noyce had to have the entire production crew driving along in front of the camera crew and Watts so they didn’t have to drive back 3 miles for makeup checks and other production purposes. So while Watts appeared to be running on a desolate Canadian road, a caravan of dozens of crew members was behind the camera.

“In some ways it was easier to do the film in the COVID environment because we were outdoors and we had a Canadian crew that like the Australians I grew up with had a can-do attitude,” Noyce said. “But filming day after day with one actor presented its own difficulties.”

Noyce was drawn to the script from “Buried” screenwriter Chris Sparling because of his time during COVID lockdown with his two children, which he called the “best six months of his life” because of the time he got to spend with them. That experience made the “Patriot Games” director think about the nightmare that every parent hopes to avoid: finding their child in danger. 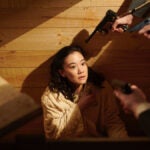 “This film is about the length that any being will go, human or not, for their offspring,” Noyce said. “It’s a film about the panic I’ve felt so many times at the department store or the railway station or at LAX when I’ve lost sight of my kids…you just go into overdrive. It just grips you.”

Watch the full interview with Noyce in the video above.