A version of this story about Noomi Rapace in “Lamb” first appeared in the International issue of TheWrap magazine.

Noomi Rapace was sitting waiting for “the knock” on her trailer door, a sign that a mother sheep was ready to deliver a baby. She had just traveled hours to a small Icelandic village to film a movie about a hybrid lamb-human baby for six months and no money. And all her training didn’t prepare her for having to birth this little miracle on her first day of filming.

“I was running down to the barn, and they were like, ‘The lamb is coming!’ OK, I’m just sticking my hands in here! I guess this is what we’re doing,” Rapace said. “It was the birth of the movie that kicked off everything, but from that point there was no return. I was just in it.”

The emotional connection she formed in that moment carried through to her performance in Valdimar Jóhannsson’s “Lamb,” Iceland’s Oscar entry and a movie about coping with loss and how we go to extreme lengths to maintain a sense of normalcy.

Rapace had been itching to return to art-house cinema and felt the “fragile” and “personal” story at its center was something she’d been waiting for “my entire life.”

“I always need to bring it back to myself and find situations or periods in my life like an emotional mirror so I can dig into myself,” Rapace said. “I did go to places where it was really painful to be, of loss and heartbreak. How do you find your way back into life when you’re broke?”

But the star of “The Girl With the Dragon Tattoo” can also flash that cold, action-star glare when she needs to. It came in handy in one scene in which Rapace’s character mercilessly shoots the lamb that birthed her new “child.” (Rest assured, the real lamb wasn’t harmed.)

But Rapace found it less challenging to prep for that scene than you might imagine. “It’s so brutal! I really felt like she was a direct threat against my happiness. It was weird. We didn’t have a good relationship, me and the mother sheep,” the actress joked. “When I came to set, I always felt like she was staring at me. ‘Lady, look away! Leave me alone!’ And she was doing this stomping movement, trying to scare me, and I’m like, ‘You can’t scare me, bitch!”

Read more from the International issue of TheWrap magazine. 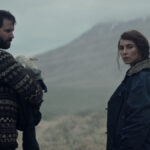