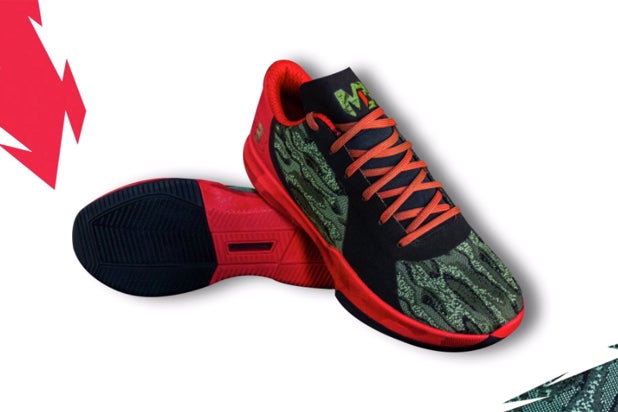 Big Baller Brand, the brainchild of America’s most famous sports dad and father of the three ballplaying Ball brothers — Los Angeles Lakers point guard Lonzo, UCLA freshman LiAngelo and LaMelo — revealed the red, black and teal MB1 on Twitter, which will retail for an allowance-eating $395 a pair and will start shipping this holiday season.

Today, LaMelo Ball becomes the 1st high school player ever to have his own signature shoe. The "Melo Ball 1" pic.twitter.com/3EpJuBA1EF

BBB’s shoes aren’t for ballers on a budget, but the MB1s are $100 cheaper than big (baller) brother Lonzo’s signature kicks, the ZO2s. Those sparked plenty of internet backlash when they were unveiled in May, with retired Laker great Shaquille O’Neal admonishing the Ball family patriarch on Twitter for his price point. (Big Baller Brand offers ZO2 slides for $220 for those who are marginally more budget conscious.)

But since then, LaVar has been the one laughing. Lonzo benefited from some fortunate bounces of the NBA’s lottery balls to wind up with his hometown Lakers, just as his dad ordained. And he won the Most Valuable Player award at the NBA’s Las Vegas Summer League — but seemed to play better when he traded in his ZO2s for various shoes from other manufacturers.

ESPN sports business reporter Darren Rovell speculated that having his own shoe could make LaMelo, who once scored 92 points in a high school game, ineligible to play college basketball.

The Ball patriarch didn’t sweat that in an interview with ESPN’s Jeff Goodman.

“We’ll worry about it when we get there,” LaVar Ball told ESPN. “Who cares? If he can’t play, then he can’t play. It doesn’t mean he’ll stop working out and getting better.”