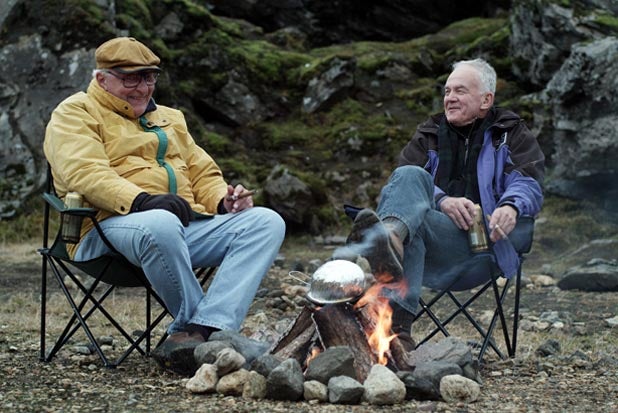 A balm for the harried soul, “Land Ho!” is part travelogue, part therapy session. Watching it could inspire you to call an old friend or book a trip to an exotic locale. Maybe both.

The movie has a very simple premise — two older guys tour around Iceland — and unfolds at an easy rhythm. What “Land Ho!” might lack in flash or hipness, it more than makes up for in earned, genuine sentiment.

The key to the movie is the palpable rapport between the two male leads: Earl Lynn Nelson is loud, boisterous and profane as Mitch, a Southern doctor fighting retirement, polar opposite to Paul Eenhoorn‘s Colin, a soft-spoken Australian recovering from the breakup of his second marriage. Former brothers-in-law, they have fallen out of touch until Mitch decides to take Colin to Iceland and help him get over his divorce.

Sure, he can be vulgar, but it’s hard not to smile at his joie de vivre. Even Colin can’t stay mad at him too long.

In Reykjavik, they meet up with Mitch’s younger cousin Ellen (Karrie Crouse), who is passing through with fellow Ph.D candidate Janet (Elizabeth McKee). Mitch insists they buy new clothes for a night on the town, delighting in the notion of squiring around young ladies at a local night club, where they meet an amusing gent with glow sticks.

After a night of overindulgence, Mitch and Colin hit the road and catch up on their lives, alternately bonding and bickering, the way old friends do. As the movie unfolds, it becomes clear that the trip was as much for Mitch’s benefit as for Colin.

“Land Ho!” evokes “Waking Ned Devine” in its celebration of enduring friendship between senior gents. It makes for savvy counter-programming in a summer full of  comic-book tales and raunchy comedies.

The rapport between Nelson and Eenhoorn is all the more impressive considering their disparate backgrounds; non-pro Nelson is an eye doctor related to Martha Stephens (who co-wrote and co-directed with Aaron Katz), while Eenhoorn is a veteran actor.

Stephen and Katz crafted the story around Nelson, racing to complete it in time for Sundance earlier this year, where it received strong reviews. Sometimes the rush job shows: The music cues are overly loud, and some of the camera work lackluster.

But it’s hard to get too worked up about relatively minor flaws in a tale this gentle and affirming, and scenery this beautiful. “Land Ho!” is well worth an expedition to the movie theater.