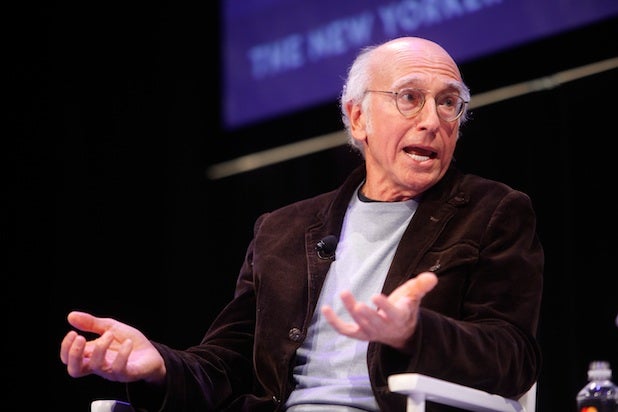 In a discussion with New Yorker editor David Remnick, he addressed the inspirations behind his most beloved work on “Seinfeld” and “Curb Your Enthusiasm,” but he also spoke to a matter of the heart.

This week, Vanity Fair released an interview with actress Jennifer Lawrence in which she said of David, “I’m in love with him, and I have been for a really long time.”

When asked about “The Hunger Games” actress’ crush on him, David responded, “Smart kid. It’s a shame that I’m about 40 years older than she is.”

Remnick then read the rest of Lawrence’s declaration of love: “I worship Woody Allen, but I don’t feel it below the belt the way I do for Larry David.”

The comedian retorted, “Maybe she’s referring to her knees. I don’t think I could do it. On one hand it’s very flattering and on another hand, it’s kind of a shame — in terms of timing. I’d have fun watching the reality show of it though.”

Also read: Jerry Seinfeld Has a Flashback to the Day His Hit Sitcom Got the Greenlight From NBC

Larry David (L) and David Remnick participate in a conversation during the New Yorker Festival on Oct. 11, 2014 in New York City. (Photo by Thos Robinson/Getty Images for The New Yorker)

The topic of sex doesn’t seem too far from David’s mind, as we found out when he described the inspirations behind some of his best work.

The inspiration seemed simple enough. “I was in a contest. With a friend. I won,” David said.

Also read: HBO: ‘Curb Your Enthusiasm’ May Return, ‘Game of Thrones’ Will Last a Long Time

And what about the “Curb” episode, “Palestinian Chicken”? On the Season 8 episode, Larry and Jeff (Jeff Garlin) go to a Palestinian chicken restaurant and feel uncomfortable about the pro-Palestinian art on the walls. Regardless of his discomfort, Larry spots an attractive woman and figures she probably hates Jewish people, but otherwise they’d make a good couple.

“It occurred to me one day, would I have sex with a Palestinian?” David said of the genesis of the episode. “And I thought, ‘Sure.’ And that was the germ of the idea, Then I thought, ‘What if we were having sex and she was yelling out all of these anti-Semitic things,’ and I thought it wouldn’t bother me in the least. I just have to figure out how to meet her.”

And by the way, David hasn’t quite shut the door on “Curb Your Enthusiasm.” He said there’s still a chance for it to return for a ninth season.

“I’m not tired of it,” he said. “Other things have come up. After a while you’re competing against yourself. There’s no ‘Palestinian Chicken.’ I’m intimidated by some of the great shows that I did in past seasons. I’m not ruling it out. I would consider it.”