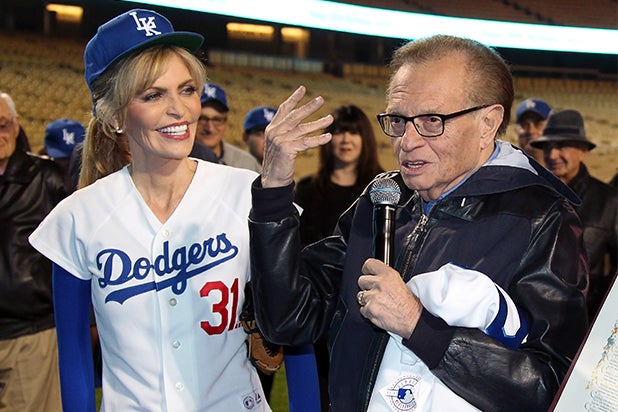 “I feel a little bit genius-like right now, just a little.” Shawn told TheWrap on the field moments after revealing the surprise she’s had in the making for a year. “Nobody pulls anything over on Larry. I did.”

King tried walking in on his wife’s final preparations on Friday that led to a cartoonish series of events. She quickly locked a bathroom door to block him, ignored his knocks, sneaked out a window, tiptoed across the yard to a garage, and drove to Dodger stadium without answering him.

“Banging on that door, I really was worried. I thought you died,” King told his wife.

King, master of ceremonies Charley Steiner, and ringmaster Shawn King after the reveal.

Around 7:15, after Larry’s own hour-long ride to the stadium for what he thought was a “dinner with the Dodgers to discuss next season,” he entered through the “395 feet” sign in center field to the voice of Dodgers’ play-by-play guy Charley Steiner announcing, “Number 80, Larry King.”

“I had no idea until I heard Charley’s voice ‘center field, turn your attention’ then I saw ‘Long Live the King’ (on the screens) and figured it must have been me,” King told TheWrap.

The 200 or so family and friends on the infield did not fire off the customary surprise-party startler: “surprise!”

Instead, singer Pat Boone, who turns 80 himself next year, started a sing-along of “Happy Birthday,” ending not with “to you,” but “to the king.”

While waiting for “the king,” guests took batting practice on the infield under jumbotrons bearing his face, with Pasadena City College’s baseball team in Dodger uniforms fielding.

A dinner in the right field Stadium Club followed with themed centerpieces (above), songs from Paul Anka, and a video tribute from pals including Joan Rivers and Betty White.

“It’s 80,” Shawn King said. “You have to share that with people. There’s such wonderful friends that have shown up to honor him.”

Amongst those friends were Mary Hart, Dr. Drew and Susan Pinsky (above), as well as Barbara and her mother Nancy Davis, Jon Housman (who runs Ora), Howard Bragman, and L.A. Dodger J.P. Howell.

King’s actual birthday is this Tuesday, November 19. He’ll be celebrating – where else – on TV, with “Jimmy Kimmel Live.”