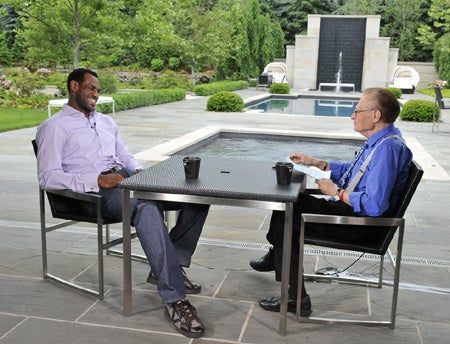 It’s only Tuesday, yet Larry King has captured a week’s worth of cable coups.

He already got Lady Gaga to admit she’s tested "borderline positive” for lupus, and now King’s touting a bigger get: he scored the first interview with LeBron James since the Cavaliers’ disappointing loss to the Boston Celtics in the Eastern Conference semifinals.

During the interview — conducted today in Cleveland and airing Friday — James, soon-to-be free agent, told King that Cleveland has an “edge” in the sweepstakes to sign him.

Here’s a partial transcript, via CNN:

KING: Do you lean at all toward the place you know the best? I mean do they have an edge going in…

JAMES: Absolutely. Because, you know, this city, these fans, I mean, have given me a lot in these seven years. And, you know, for me, it’s comfortable. So I’ve got a lot of memories here. And — and so it does have an edge.

Lady Gaga: I Was Supposed to Open for Michael Jackson on ‘This Is It’