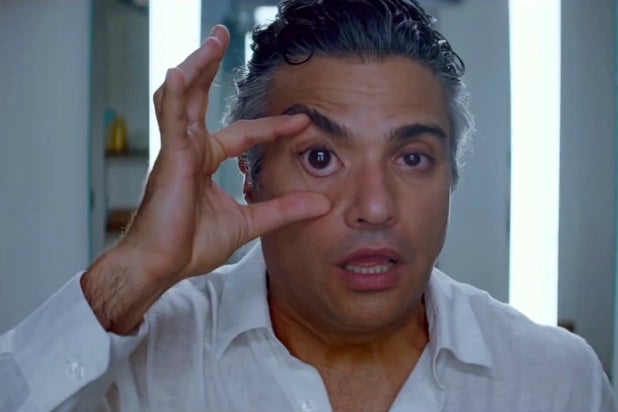 Underneath the veneer of a frivolous romantic comedy, “Las Pildoras de Mi Novio” (“My Boyfriend’s Meds”) packs a surprisingly potent message about the importance of talking about mental health issues with loved ones. Although to get to this useful kernel, the audience must first sit through some truly cringe-worthy scenes that not even Jaime Camil’s charm can smooth over.

Directed by Diego Kaplan, “Las Pildoras de Mi Novio” follows Jess (Sandra Echeverría), an ambitious marketing executive with a shot at a promotion if she figures out her tequila company’s new ad campaign on a staff retreat. Her focus seems to be more on her work than on guys, especially after she turns down an elaborate proposal gone wrong from her last boyfriend.

At a chance encounter while shopping for a mattress, Jess meets the store’s owner, Hank (Camil), a charming man who’s passionate, professional and attentive; basically, he’s Mr. Perfect. Pressured to bring a partner on her company retreat, Jess invites Hank to join her, and he reluctantly agrees. Unfortunately, when the still-new couple arrives at their island destination, Hank discovers his many pills for his litany of mental-health disorders did not make the trip with him. It’s not long before his symptoms return, and he’ll be forced to tell Jess what he’s so desperately tried to keep secret.

The movie has a little-to-no basis in medical reality. Many of the returning symptoms for Hank’s illnesses are played for laughs, like his manic-depressive bipolar episode, his foulmouthed Tourette’s interjections, or his OCD that makes it impossible to cross the lobby without jumping on the same color pavement stones. When his medicines begin to wear off, almost the moment he sets foot in the hotel, his hair begins to magically grey instantaneously and the symptoms rush back quickly. These are arguably the roughest parts of the movie, making Hank’s behavior the target of jokes.

The one redeeming factor is that it’s a welcome change to see Camil shed the telenovela bravado of his “Jane the Virgin” character for a role that’s much more vulnerable and, yes, neurotic. He runs the gamut of frenzied and despondent emotions, selling each moment or gag no matter how crass with all his charisma. It would be interesting to see that energy channeled into a script that’s less painful to watch.

Kaplan and Gary Marks split screenwriting credits, although the story is more a simple case of comic misunderstanding and less funny jokes about suicide and mental health. If it weren’t for Camil’s performance, much of the movie wouldn’t stand up. “My Boyfriend’s Pills” doesn’t have a clear perspective, starting first with Jess before shifting to Hank and then back to Jess for the final scenes.

Cinematographer Emiliano Villanueva (the 2019 Mexican remake of “My Best Friend’s Wedding”) and Kaplan don’t seem to agree on a color timing scheme, which means certain scenes look pinker and others look tinged with purple. In one dinner scene, Jess is evenly lit, but opposite her, Hank looks like he’s sitting in the shadows of “The Godfather,” his face half cloaked with darkness. Even if that was supposed to be intentional, it comes off like a mistake. Cameo appearances by Jason Alexander and Brooke Shields make for some brief laughs, but they’re not enough to sustain a chuckle.

The well-intentioned message of “Las Pildoras de Mi Novio” is an important one, because, like many places around the world, many Latin Americans and U.S. Latinos can view therapy with suspicion or dismiss it altogether. When Hank’s therapist asks him why he hasn’t told Jess his full story, he says that it’s because “she’s Latina”; he knows the cultural stigma well and fears losing her above all. To see Camil wrestle with fear over revealing his character’s hidden mental health issues feels touching, more than any other portion of the movie.

The story, the jokes, even Hank’s imaginary pill-shaped friends, and an expensive trip to the curador/local shaman are cheap tricks for a hollow laugh. Better to savor the few carefree moments of Camil’s stellar performance and the poignant lessons to learn about love, health and communication.