At 8:58 p.m. on Monday, Craig Fiegener, a reporter for the NBC Las Vegas affiliate KSNV, was rehearsing his umpteenth live shot of the day.

Standing in front of the local blood bank,  Fiegener carefully enunciated every word in an effort to overcome the growing fatigue as he entered his 22nd hour on the job.

“I got about two and a half hours of sleep,”  Fiegener told TheWrap. “I get a little stuttery after working so many hours.”

His secret weapon? “An ice-cold Coca-Cola,” which he keeps nearby in case his tongue decides to go haywire.

Local Vegas TV stations shifted into overdrive after a lone gunman opened fire on a music festival crowd from the 32nd floor of the Mandalay Bay Resort and Casino on Sunday night, killing 59 people and injuring 527 others.

All four broadcast affiliates  — Fox’s KVVU, CBS’ KLAS,  NBC’s KSNV and ABC’s KTNV — dropped their regularly scheduled programming and most of their commercial breaks, going for wall-to-wall coverage of the massacre.

With an all-hands-on-deck mandate, reporters and staffers have been working anywhere from 12 to 20 hours straight.

“I’ve covered disasters and natural events,” Fiegener said. “I even covered the O.J. Simpson trial, which was a great story. But nothing was as horrific or as big as this.”

All four stations made the unusual decision to drop most of their commercial breaks — and the revenue that comes with it — to provide live nonstop news coverage through Monday evening. Some stations, like KLAS and  KTVN, continued their local coverage through Monday night, giving up their lucrative network prime-time broadcasts.

“It was a difficult decision for us,” Joyce Kotnik, assistant news director at KLAS, told TheWrap. “We had to go through all the pros and cons but we felt it was important for our community to preempt our prime-time programming.”

Like the other affiliates, KLAS also scrapped most of its commercials throughout the day, only running two one-minute ad breaks each hour during prime-time Monday.

“We wanted to make sure we were sensitive to the situation,” Kotnik said. “You don’t want to go into a commercial break when people are suffering.”

“We had a member of our production team at the concert last night and she had to escape the scene,” he said. “She made it out but she also saw the horror. So, this hit home for everyone.”

Fiegener, who lives a couple of miles from the Mandalay Bay, was one of the only reporters who managed to get into the space around the hotel before police closed off the area. 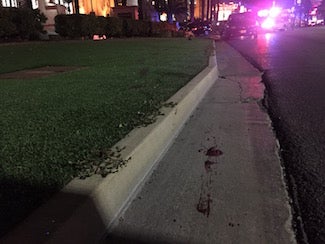 “The thing I will never forget was when I was on Las Vegas Boulevard alone and I looked down because I noticed something on the ground,” he recalled. “I looked a little closer and I realized it was a streak of blood.”

Bryan Scofield, a meteorologist for the local ABC affiliate, ditched his weather forecast for at least eight hard-news live shots on Monday.

“This is the biggest coverage we’ve had,” he said. “Ever.”

The shooting, he said, touched everyone at his station on a personal level.

“It’s a small community,” he told TheWrap. “Everyone here knows someone who was affected by this tragedy.”