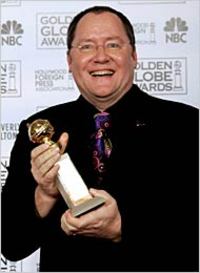 In the quiet becalming of Hollywood that occurs in the days post-Oscar, my colleague Laura Holson has weighed in with a fascinating, and fairly rare, glimpse into the style and substance of John Lasseter, the founder of Pixar, come lately the chief honcho at Disney animation. He has been charged with reinventing the place, and hopes to do so in the grand tradition of Walt Disney. Lasseter is one of those classic man-behind-the-curtain figures in Hollywood; his home base of Pixar, up in northern California, has a true bunker-style culture and is extremely media averse, so this is a welcome ray of light into his thinking. The story has wonderful touches, like the animation mogul's pulling rubbery faces, and looking shocked that a reporter might ask him the most obvious of questions. Here's how it starts:

"It wasn’t the first time John Lasseter, the director of 'Toy Story' and 'Cars,' had sat through the screening of a not-quite-ready animated film. But when he saw an early cut of Disney’s 'Meet the Robinsons”' last March, he watched it with a new eye. He wasn’t just a fellow director, and a founder of Pixar Animation Studios. This time he was the boss, the chief creative officer of animation for the Walt Disney Company, which had agreed to acquire Pixar two months before.

As he sat in a dark theater on the first floor of Disney’s animation studio here, something bothered him about the villain…(read the rest)