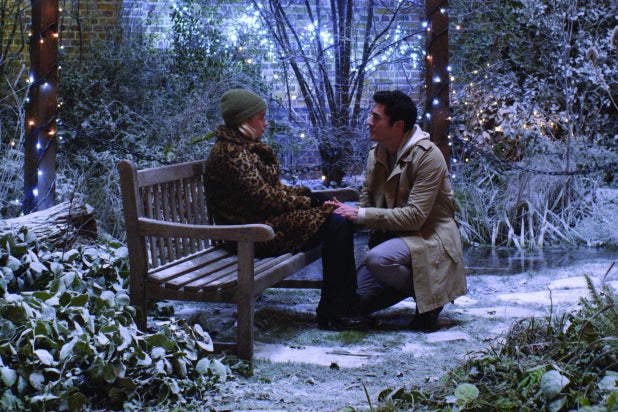 People don’t generally think of a musician’s Christmas albums as their best work — unless that musician is named Bing or Mariah — but fans still enjoy that rush of holiday familiarity and sentimentality. So think of “Last Christmas” as director Paul Feig’s Christmas album; it won’t be the first comedy anyone thinks about in his accomplished filmography, but viewers might find themselves reaching for it come December all the same.

I’ve seen more than my share of Christmas films, and “Last Christmas” scratches a lot of my holiday-movie itches (bickering families, seasonal redemption) while also delivering what I want from a Paul Feig movie (complex heroine, scene-stealing cameos from an impressive line-up of comedy heavy-hitters). Those cameos, incidentally, are a Feig tradition going all the way back to his last Christmas movie, 2006’s underappreciated “Unaccompanied Minors.”

This isn’t as hearty a repast as, say, “A Simple Favor” or “Bridesmaids,” but if you just want to stuff your face with a sticky pudding, “Last Christmas” delivers, even if you were most likely correct when you guessed the film’s twist after watching the trailer.

Emilia Clarke stars as Kate, a Londoner who has Anglicized her own name; her Slavic-refugee mother Petra (Emma Thompson) still calls her “Katarina.” Kate’s life is falling apart: She’s running out of friends’ couches to crash on in order to escape her mom’s smothering attention, she’s not taking care of herself after having had a major health crisis one year before, and her callous obliviousness is ruining her relationships, including the one with her sister, Marta (Lydia Leonard).

Kate’s life begins to change when she randomly encounters Tom (Henry Golding), who seems to see through her façade and offers gentle advice and understanding when she needs it most. As they grow closer, Kate seems to be getting her life back on track, even as Tom proves to be more and more elusive as a soulmate.

All of this, of course, takes place in a fantasy London festooned with garland and twinkle lights around every corner. Kate works in a gloriously tacky Christmas-all-year shop run by the stern but understanding Santa (Michelle Yeoh), and even the homeless shelter where Tom volunteers has more LED bulbs wrapped around it than the ice rink at Rockefeller Center.

Emma Thompson does double-duty here as screenwriter (sharing script credit with Bryony Kimmings and story credit with Greg Wise). She clearly loves her rom-com and her Christmas-movie tropes, starting with the central couple — she’s a mess, but pixie-ish, and he’s the smoothest holiday rescuer since Cary Grant in “The Bishop’s Wife” — and working outward to a community of friends, neighbors, homeless people and street performers who can all gather together at the end to celebrate the bigger-hearted Kate 2.0. (London can, apparently, be just as neighborly as a small town in a Hallmark Channel or Frank Capra movie.)

Unfortunately, the storytelling often lurches in fits and starts, trying to wedge in everything from Brexit-era xenophobia to a big chunk of the George Michael catalog, and the pieces don’t always fit together smoothly. (But when they do, we get a becoming-a-better-person montage set to “Freedom ’90” that made me forgive a lot of the movie’s shortcomings.)

And while Clarke isn’t quite up to the task of keeping us interested in a character who spends so much of the film being such a self-destructive narcissist, Feig keeps her surrounded by pros like Golding, Yeoh and Thompson, who can make magic with the most seemingly throwaway lines of dialogue. (Thompson’s fretting Petra turns “All my friends were murdered” into comedy gold.)

Cinematographer John Schwartzman (“The Highwaymen”) gives the film the aggressive gleam of a holiday TV commercial, and the art-direction, costume and set-decoration crews clearly worked overtime on Santa’s wonderfully over-the-top Christmas emporium and Kate’s delightful and ridiculous elfin work uniform. If your holiday aesthetic is “More is more,” so is the movie’s.

Would that it yielded as much emotion or laughter as it does tinsel, particularly given Feig and Thompson’s respective track records, but “Last Christmas” provides enough of a warm, fuzzy glow to light up a bleak midwinter.