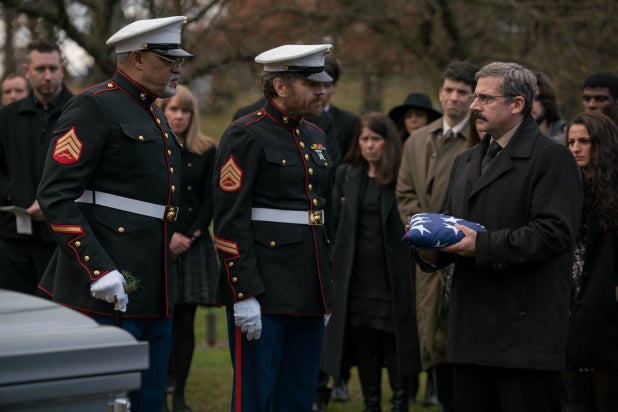 It’s usually the nuanced details, those flashes borne of unexpected truths, that lift a Richard Linklater film to another level. Think of the hidden insecurities in “Dazed and Confused,” the self-protective lies of the “Before” trilogy, or the dissonant perspectives in “Boyhood.” No matter what else is going on, the understated observations always resonate most strongly.

There are plenty of truths to be found in “Last Flag Flying,” and a great deal of sincerity as well. But regrettably, there is not much in the way of understatement.

Linklater cowrote the movie with Darryl Ponicsan (“School Ties”), who also penned the post-9/11 novel on which it’s based. Alas, the filmmakers have approached the material with such a heavy hand that their project feels more like an awkwardly adapted play.

It’s 2003, and when Vietnam vet Doc Shepherd (Steve Carell) learns that his son Larry, a Marine, has been killed in Iraq, Doc impulsively reaches out to a long-estranged buddy he hasn’t seen in decades. Heartbroken and overwhelmed, Doc shows up unannounced at the bar owned by loudmouth alcoholic Nealon (Bryan Cranston). Nealon, in turn, takes him to find fellow vet Mueller (Laurence Fishburne) who, much to their shock, has become a pious man of the cloth.

Doc’s hoping that Nealon and Mueller will help him retrieve Larry’s body and attend the memorial at Arlington Cemetery. But when they get to their destination, Doc has a change of heart: he wants his son buried in a civilian service back home in New Hampshire. And so begins Larry’s long journey home, with his coffin accompanied by the three aged veterans and his currently-enlisted best friend, Lance Corporal Washington (J. Quinton Johnson, from Linklater’s “Everybody Wants Some!!”).

Linklater is such a skillful filmmaker that he can hang a brilliant movie on the simplest of plotlines. And he’s got the line all set up here: four men doing what every cinematic road tripper (and many a Linklater character) has done before them: laughing, crying, drinking, fighting, and philosophizing, all in the name of knowing each other (and themselves) a little better.

In this case, the men must come to terms with the past before they can move forward. Pastor Mueller resists for a while, preferring not to think about his hellraising history. But Nealon is the type of guy who won’t let anything rest: he talks, needles, debates, and argues. And given the circumstances, most of the above activity centers around the subject of war: Who creates it? Who fights it? Who benefits from it?

All valid questions, and ones worth asking and answering over and over. But Linklater and Ponicsan are so intent on getting their points across, they’ve made a movie that’s more about the messages than the men designed to deliver them. (Women are, for the most part, a nonpresence; this is very much a story about the meanings of masculinity.)

Ponicsan’s novel was written as a sequel to his book “The Last Detail,” which Hal Ashby and Robert Towne adapted for the screen in 1973. Linklater chose to start over, giving the characters different names and slightly altered back stories. In a way, that’s a shame. This story parallels “The Last Detail” in evident ways, so a sequel structure, in which we catch up with already-existing characters, might have lent the movie more weight.

But Linklater’s preference is also understandable. This isn’t the most marketable film to begin with, so why limit the audience still further to those few who have seen the original? A sequel might also have led to higher expectations and unflattering comparisons: Jack Nicholson and Randy Quaid, who played young versions of the Cranston and Carell roles, were nominated for Oscars, as was Towne for his screenplay.

Unfortunately, those sorts of accolades seem less likely here. Every theme is overtly defined, every subject dissected until it dissolves. Conversations turn into speeches; references are hit hard.

The performances, for the most part, fit with this broadly-drawn approach. Cranston is so theatrical in his creation of a soft-hearted cynic, he might as well be striding across a stage. (The film’s claustrophobic visuals also emphasize the theatrical feel.)

Fishburne is solid but familiar, as a complex man most comfortable with simple definitions of right or wrong. And while the quietude of Carell’s gentle tone is welcome and often touching — particularly in contrast to his amusing bombast in “Battle of the Sexes” — he never quite mines the depths of his character’s immense pain. The strongest turn, in fact, comes from the least-known player: Johnson, who imbues his young Marine with a laconic resolve that suggests layers unseen.

Everything else, though, is plainly laid out before us: The pain and pride sparked by conflicts both external and within. The disappointments and discoveries of middle age. The complicated coexistence of loyalty and cynicism.

Linklater is clearly and earnestly hoping to shake us out of any sense of complacency. That’s undeniably admirable, but it’s not, in this case, entirely effective. As he has so often proven, it’s the subtlest insights that make the biggest impact.