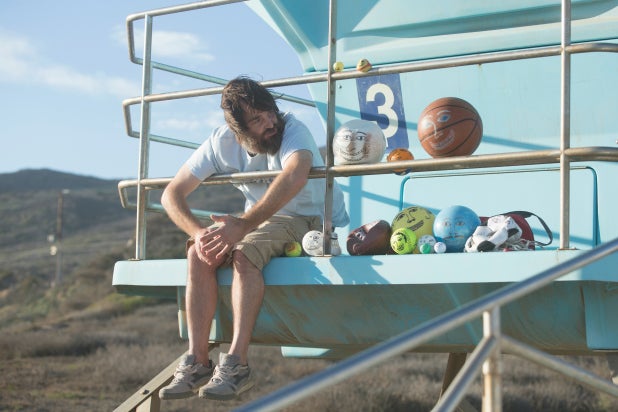 Will Forte‘s Phil Miller finally has some friends to play with on Fox’s “Last Man on Earth” — but that doesn’t mean Hollywood’s nicest guy has forgotten his old buddies.

TheWrap recently spoke with Forte about his returning (and excellent) sitcom, and our conversation veered off in a highly important direction. On the series, Miller leaves the character’s collection of sports-balls-with-faces buddies with Mike (Jason Sudeikis), an effort to keep his apparently dying brother company. But where is Gary, Diego, Bryce, Anton and the gang in real life?

“They’re just in some bucket,” Forte told us. “In fact, it’s funny, because when they come back out I just feel so bad for them.”

Yes, the busy “SNL” alum might be going a bit crazy, by his own admission. That’s at least partially due to how busy he is. Not only does Forte star in “Last Man,” he writes it and stays involved throughout episode editing. (He’s also currently in the writing process on “MacGruber 2”; Jorma Taccone penned a first draft based off a group outline, Forte tells us.)

“Everything is magnified,” he said of his busy schedule. “I get so tired that you’re a little quicker to get angry, quicker to get sad — you laugh at [silly] things that you’d never laugh at.”

“There’s something about these balls that I understand now, truly, like Phil does in the pilot,” he continued. “I understand how you could get sucked into getting close to these inanimate objects. They’ve really become a part of the show … and part of our lives.”

Also Read: 'Last Man on Earth's' Will Forte Reveals Why That 'Dumb-Looking' Beard Is Back for Season 2

Forte told us that leaving the beloved volleyball, shuttlecock, soccer ball and golf ball — among others — behind was “a very emotional moment.” And so will be their reunion, something he promised will happen this season.

“I got emotional in a way that I don’t get emotional at funerals. It was this really weird thing,” Forte said. “You should lock me up and take me to an asylum, because I am starting to go crazy.”

As for his on-screen flesh-and-bones bro, there’s a reason we used the word “apparently” before “dying” above — you never see Mike croak, and with no doctors, there was no real confirmation that the astronaut had the virus and not just some similar symptoms.

Also Read: Emmy Contender Will Forte on That Crazy Haircut in 'Last Man on Earth': 'It's Really Fun to Be Weird' (Video)

“I like stuff to be open-ended for sure,” Forte explained the choice. “Certainly the other Phil Miller (Boris Kodjoe) is dead.”

“I really, really loved how that [Mike] storyline ended at the end of the season,” he continued. “So, I would say, we all would be happy with that being the closing chapter of the Mike story, because we just like so much how it turned out. But then again, we never do actually see him die, so anything is possible.”

One thing we can confirm is that Mike isn’t one of the two people seen headed for shore with crazy Pat (Mark Boone Junior) in the Season 2 finale — those folks are legit newbies to Phil Miller’s (and Lord/Miller’s) sparsely populated world. They have no idea what they’re in for.

“Last Man on Earth” returns to Fox Sunday at 9:30 for its Season 3 premiere.