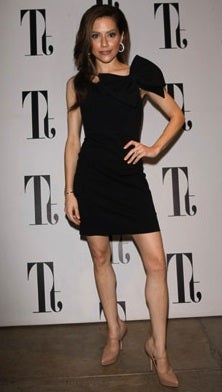 According to a search of the most trafficked photography wire services, Brittany Murphy’s last public appearance was two and a half weeks ago.

Murphy hosted a launch party for the Tt collection pop-up store on Third on Dec. 3. She hosted the event for designer and her “close contact” Tiffany Saidnia, according to Saidna’s representative. (At left, Murphy wore the designer’s clothes on the red carpet that night; photo by WireImage.)

Vodka brand Svedka sponsored the night of shopping with proceeds going to L.A.- based disability charity Looking Above & Beyond.

Michelle Schettino, who worked with Murphy on that event, told The Wrap, “It’s all very unfortunate. … Brittany was extremely wonderful to have worked with and she will be greatly missed.”
* 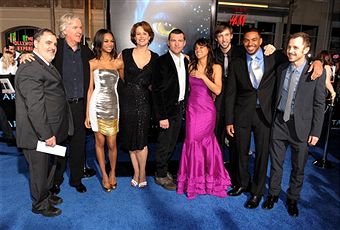 The "Avatar" gang’s mile of smiles at Wednesday’s Hollywood premiere means that nobody in this lineup (right) checked the weekend weather forecast. An East Coast storm threatened but could not prevent the self-proclaimed “king of the world” (director James Cameron’s announcement at the 1998 Oscars) from staking a legitimate $73 million claim as “king of the weekend.”
(At right, producer Jon Landau, Cameron, stars Zoe Saldana, Sigourney Weaver, Sam Worthington, Michelle Rodriguez, Joel Moore, Laz Alonso and Giovanni Ribisi arrive at Grauman’s; all photos by Getty Images.)
After a standing ovation at the premiere, Landau, Saldana and Fox co-chairman/CEO Tom Rothman celebrated in the Hollywood & Highland ballroom, a room they may return to with many gold statuettes if the Academy voters offer similar kudos on March 7.
Although he withheld a crown and scepter, Gov. Arnold Schwarzenegger anointed his “Terminator” director with a star on the Walk of Fame on opening day. 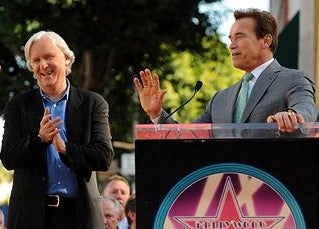 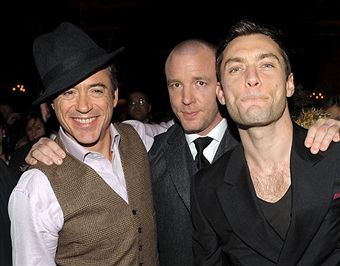 Finally, in the spirit of the season I recruited a few party regulars to host the annual “Wrap it Up," a Hollywood-style Santa’s workshop. Here, the attending talent doesn’t get any freebies or pampering. Instead, they get put to work wrapping gifts for others.
Tori Spelling and Dean McDermott led a team in wrapping 100 presents at the NineThirty Restaurant at the W Los Angeles on Wednesday night. Despite much prodding, neither of the “kids” on "Lost" — Sterling Beaumon who plays “Young Ben” and Malcolm David Kelley (“Walt”) — would discuss their involvement in the final season.
Thanks to Graham Beck for keeping the adult workers champagne’d and working quickly.