In her career as a playwright, Ngozi Anyanwu has displayed remarkable gifts for storytelling about the Nigerian American experience — first in 2016’s “Good Grief,” about a young woman grieving a lost love, and then in 2018’s “The Homecoming Queen,” which recorded the Nigerian diaspora in reverse as a successful American writer returned to her homeland to visit her ailing father.

Anyanwu’s new play, “The Last of the Love Letters,” which opened Monday at Atlantic Theater Company’s Off Broadway Linda Gross Theater, is both more intimate and more ambitious in ways that don’t always cohere.

As in the Vineyard Theater production of “Good Grief,” Anyanwu also stars in “Love Letters,” opening the show with a long, spunky monologue delivered in a somewhat messy, sparsely furnished apartment. She delivers a message to an unnamed, unseen ex-lover that is full of all the contradictions of romance.

She shares how she wore her hair long because “You like it long because you’re a f—ing cliche” — and then follows with an unexpected admission: “I liked that you liked it even though it wasn’t fully me.” (She’s wearing braids now and lets them flow freely as her speech continues.) And under Patrica McGregor’s direction, Anyanwu is a captivating performer, by turns coquettish and vengeful, confident and regretful about her lost love.

But while you may be expecting in the second half of the show to hear from the man in the relationship, a she-said-he-said call-and-response on modern love, Anyanwu the playwright subverts our expectations with a second section that veers into either sci-fi or allegory. The tight apartment peels away to the Atlantic’s full stage, with the bed off to one side, a urinal on the left stage wall and the suggestion that we are either in a prison or a mental ward. (In Yu-Hsuan Chen’s spare set design, this cell occupies easily nine times the space of the woman’s apartment — a curious choice since a more claustrophobic setting might have better suited the monologue that is to come.)

Here, Daniel J. Watt’s You No. 2 (as his character is identified in the program) holds court, though he has lost track of what day it is and suspects his unnamed lover is “probably not even thinking about me. You’re probably living this beautiful life.” There are hints of external dystopian calamity — he wonders if the sky is “still purple” and the rain “still burn(s)” — but also of possible psychosis and clinical depression. A hazmat-suited stranger shows up occasionally to dispense pills to our hero, and to check with a flashlight that he’s actually swallowed them.

Watt’s hallucinatory monologue is sometimes defensive, often deliberately unsettling and also meandering in a way that can provide more frustration than fascination, despite Watt’s considerable stage presence. And Anyanwu seems to pile on additional themes as the 70-minute show progresses, from the isolation of living in quarantine to the plight of Black artists and their fear of erasure in contemporary society. It’s a bit too much heft for this slender show to bear. 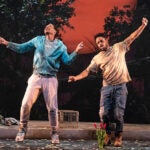