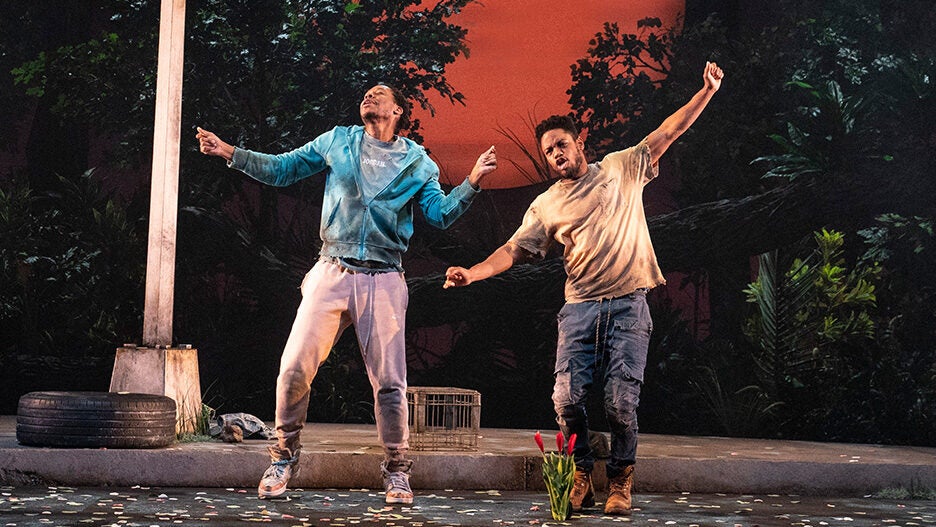 Perhaps it began with Robert De Niro’s “You talkin’ to me?” rhetorical question, repeated with slight variations, from “Taxi Driver.” That same year, 1976, David Mamet constructed three plays around artful repetitions, with a number of expletives thrown in.

Within the first few minutes of Antoinette Chinonye Nwandu’s remarkable play “Pass Over,” which opened Sunday at Broadway’s August Wilson Theatre after a 2018 run at Lincoln Center Theater, the two young Black men standing on an urban street corner seemingly repeat themselves ad nauseam as they detonate more and more F-bombs and N-bombs while lighting fewer and fewer explosions with their limited vocabulary.

Yet, even before “Pass Over” takes a wild turn with the entrance of a nattily dressed alien from another world, those two Black men, Moses (Jon Michael Hill) and Kitch (Namir Smallwood), begin to emerge as a well-honed comedy act, one from the golden age of vaudeville that also conjures up Vladimir and Estragon’s endless wait for Godot. And unlike Samuel Beckett’s characters, these men are fully aware that the little corner of the universe they inhabit is where they’ll die. 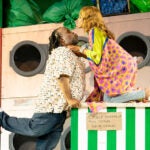 Danya Taymor’s direction alternately treats “Pass Over” as a light comedy and a horror movie, that latter tendency a hallmark of her work in recent plays by Martyna Majok (“Queens”), Jerry O. Harris (“Daddy”) and Will Arbery (“Heroes of the Fourth Turning”). Wilson Chin’s wasteland set and Marcus Doshi’s startling lighting design contribute mightily to the suspense.

As for that alien, he arrives in the person of Gabriel Ebert, singing Rodgers and Hammerstein, carrying a bottomless basket of goodies and apparently lost in his character’s quest to find his mother’s house. Like the other two men on stage, he wears a baseball cap, but his is duo-tone pastel, providing a nice accent to his otherwise cream-colored seersucker suit that belongs behind an ice-cream counter in “The Music Man.” Rather than N-bombs and F-bombs, he has his own set of repetitions, the most common being “gosh, golly, gee.”

Ebert’s character is identified in the program as Mister, although he later clarifies, saying his name is Master. When Hill and Smallwood endlessly spout the N-word, the audience in the August Wilson Theatre listens politely. When Ebert lets go once with the M-word, he provokes a very different reaction.

In Nwandu’s script, Mister/Master comes off more than a little ridiculous. He’s ridiculous on stage, too, but he’s also something else. He’s theatrically arresting. Much of this has to do with Ebert’s charm offensive, as ebullient as it is seemingly oblivious — until it isn’t. But the laughs he gets from the audience derive mostly from Hill and Smallwood’s silent, dumbfounded reactions. Who is this guy and what’s he doing on their city block? As a deux ex machina, he’s a real humdinger — to use a word from Master/Mister’s otherworldly dictionary. 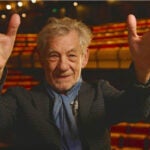 Also Read:
‘On Broadway’ Film Review: Documentary Offers Neon Lights But Not Much Else

Later in the play, Ebert appears as a police officer, identified in the program as Ossifer. The seemingly inoffensive charm is gone, replaced by the kind of malevolent supremacy that will never let Moses and Kitch leave their city block alive. More terrifying than Ossifer’s control is how conditioned Moses and Kitch are to dealing with it. What they haven’t learned is how Mister/Master’s complicity plays into the cop’s routine.

When “Pass Over” had its world premiere in 2017 at Steppenwolf, one Chicago critic complained that Nwandu addressed the problem of cop violence but not Black-on-Black violence. It’s a bizarre complaint. Nwandu effectively mixes the profane and the sacred, with the Moses character being the most obvious biblical reference. The title “Pass Over,” however, takes on a new meaning. Not to give away too much, but the playwright does address Black-on-Black violence. She sees it as a kind of suicide, and it’s spelled out right there in her play’s title.

This is pretty much the review I wrote after seeing “Pass Over” at Lincoln Center Theater’s tiny Claire Tow Theater in 2018. I put the play on my 10 Best list for that year. Spike Lee secretly filmed the Steppenwolf production of “Pass Over,” which debuted at the 2018 Sundance Film Festival. And then police officer Derek Chauvin murdered George Floyd on the streets of Minneapolis. 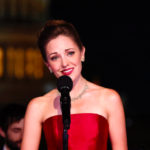 In the wake of that crime, Nwandu has rewritten the ending of her play. In one sense, the show has gone Broadway. Chin’s original stark cityscape now opens up for a grand finale that is a real coup de theatre that is sure to dazzle, to use a bunch of words familiar to Mister. Taymor showed she could juxtapose comedy and horror; and with the new version, she also shows herself adept at delivering fantasy.

I’m glad to have seen both versions; the one builds on the other. For those theatergoers who missed “Pass Over” at Steppenwolf or Lincoln Center, I’d recommend streaming Spike Lee’s version (it’s available on Amazon Prime) and then seeing the play on Broadway, so you, too, can experience that progression, from utter despair to eternal survival.

I’d feared that Nwandu’s intimate three-hander would lose much of its impact going into a big Broadway house. Too often plays performed in large theaters have an audio mush that makes it difficult to decipher from which actor’s mouth the words are coming. Fortunately, Justin Ellington’s expert sound design solves that problem. In fact, when each of the three actor’s sheds his pesky body mic at play’s end, Taymor’s direction turns it into a witty act of liberation.

Also Read:
Broadway Returns! Complete Guide to What Shows Are Opening – and When (Updating)
BIO Robert Hofler
Robert Hofler, TheWrap's lead theater critic, has worked as an editor at Life, Us Weekly and Variety. His books include "The Man Who Invented Rock Hudson," "Party Animals," and "Sexplosion: From Andy Warhol to A Clockwork Orange, How a Generation of Pop Rebels Broke All the Taboos." His latest book, "Money, Murder, and Dominick Dunne," is now in paperback.