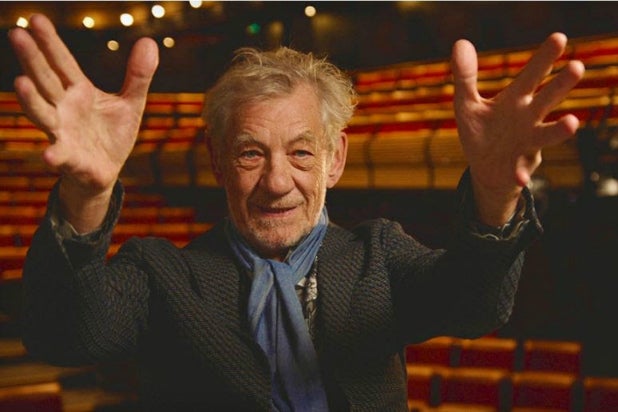 A promotional video writ large, “On Broadway” feels like the kind of hotel programming a tourist might find playing on a loop at the Times Square Marriott Marquis.

Brought to the screen by film and theater director Oren Jacoby (“Constantine’s Sword”) and produced by Broadway insiders, this earnest but oddly superficial documentary zips through decades of artistic impact without taking enough time to create its own memorable impression.

All the elements are there, beginning with an ostentatiously celestial range of talking heads. Alec Baldwin, Helen Mirren, Hugh Jackman, Ian McKellen, John Lithgow, James Corden, Christine Baranski and others show up briefly, each delivering a pithy statement about how important The Theater is. Only a few — including Tommy Tune and George C. Wolfe — get a chance to say anything truly noteworthy or unexpected. For the most part, it seems we’re supposed to be impressed by their mere presence.

This isn’t their fault; either they weren’t asked particularly insightful questions, or the more compelling conversations were left out of the finished product.

And product is what this is, neatly packaged and ready for distribution. Each decade gets a swift survey, with familiar footage of Times Square lights interspersed among quick stills of scenes and marquees from the corresponding era. Jacoby also threads the pre-opening preparation of a contemporary production, called “The Nap,” into the mix. But he drops this storyline for long periods and then picks it up without much detail, so we never have the chance to get invested. (“The Nap” closed last November.)

A few seminal shows do get a little more attention than the others. “A Chorus Line,” “Cats,” “Angels in America,” “Hamilton,” and the works of August Wilson earn a few minutes each, and we usually find an interesting moment or bit of trivia in these slightly extended scenes. For example, the $407 million Broadway box office gross for “Cats” sounds impressive until you learn that “Phantom of the Opera” has made $1.2 billion.

And it’s always thrilling to watch Elaine Stritch rehearsing her original performance of Stephen Sondheim’s “The Ladies Who Lunch,” even if there are other, better places to see it (including D.A. Pennebaker’s excellent 1970 theater documentary “Original Cast Album: Company”).

A fair amount of time is also given to the people who built up Broadway, particularly those in the Shubert organization (the movie’s executive producer, Pat Schoenfeld, was married to Shubert CEO Gerald Schoenfeld until his death in 2008). But a more compelling historical sequence finds other investors trying to tear it down, to commercialize the district and build that giant Marriott right in the middle.

In fairness, this probably would be the ideal movie to watch from a hotel room high above the city, as you’re getting ready to take in a few shows. What’s not to love about hearing snippets of great songs, seeing a parade of celebrities share their passion, or learning that, for example, Mike Nichols discovered “Annie” when he saw a regional tryout in Connecticut?

Just be aware that the approach is similar to that of a generic jukebox musical, speeding by all the greatest hits without delving deeply enough into any of them.