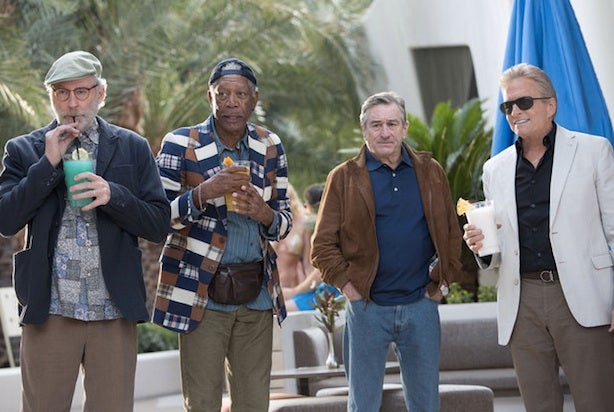 Actors are a notoriously vain lot, and who can blame them, given that their work involves having their faces projected on the widest of screens, with all the wrinkles and bags magnified for the world to see.

With that in mind, it’s remarkable that Michael Douglas, Robert De Niro, Kevin Kline and Morgan Freeman all signed on to star in “Last Vegas,” which follows the Oscar-winning foursome as they hit Sin City with their fanny packs, AARP cards and Viagra in tow. It opened Friday.

Director Jon Turteltaub said the actors didn’t shirk from the challenge of playing a band of septuagenarians throwing an unlikely bachelor party.

“Not only did they embrace playing their ages, but they even made fun of how old they are in the movie,” Turteltaub said.”They were unashamed of the reality of aging.”

“The only kinds of thing they wouldn’t do was play older than their age,” he added. “Nobody wanted to use a walker or be seen drooling. They wanted to make 70 seem vibrant and alive.”

Also read: Bobby D and the Boys of ‘Last Vegas’ Retain Their Sexuality in Their Golden Years (Guest Blog)

It helped that the stars, who have never worked with one another despite decades in the business, were all on friendly terms. That was critical to establishing the kind of camaraderie necessary to make them seem like a gang of former childhood friends on a weekend debauch.

“I believe, and no one will tell me if right or wrong about this, that there’s this secret club where all the famous people in the world know each other and meet each other, because it seems like famous people are always friendly with each other,”  Turteltaub said. “But that helped, that they were friendly and all had a mutual respect for one another. It helped them leap in.”

Even certain off-screen struggles, such as Michael Douglas’ recent treatments for cancer, helped give the film more resonance and added layers to the “Fatal Attraction” actor’s performance as an aging ladies man.

“The health problems that he’s had have forced him to get more existential and to look at his mortality in ways that have made him more open and sensitive,” Turteltaub said.

With “Last Vegas” wrapped up, Turteltaub said he is hard at work preparing the third installment in his hit adventure series, “National Treasure.”

He can also rest easy knowing his legacy is secured as the man who shot Morgan Freeman’s first on-screen hemorrhoid joke.

“Morgan Freeman is not the guy everyone thinks he is,” Turteltaub said. “He is so fun, so funny and so lighthearted, and he knows better than anyone the although he’s convinced the world he’s cornered the market on gravitas, he just a pretty jovial guy.”