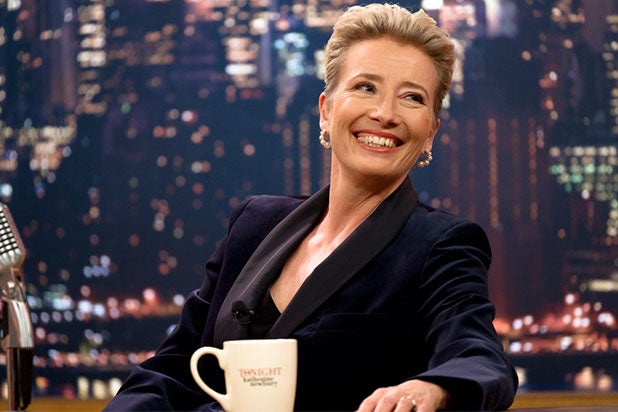 If you identify as a minority, you know and are often followed by two terms: “affirmative action” and “diversity hire.”

In school, being seen as the affirmative-action student meant being perceived as not as intelligent or capable as the white students, and when you enter the working world, being the diversity hire brands you as being the one who was taken on for a quota, not for your skills or talents. Neither of these is true or remotely accurate, of course, but it’s something that sticks with you even as you climb up the ladder in your career.

It’s with this in mind that writer-producer-star Mindy Kaling wrote “Late Night,” a witty, intelligent, and entertaining view behind the scenes of a late-night talk show; the film isn’t autobiographical, but it does stem from her real-life experience getting hired as a writer on the hit TV show “The Office.”

We open on Katherine Newbury (Emma Thompson), network television’s only female talk-show host for more than 28 years. She is intelligent and guarded, and even though she was once a comedian — and her status as the only woman with her own late-night talk show was once enough to keep her audience’s interest — her show has become a bit bland in comparison to her competitors, slipping in the ratings for nearly a decade. When it’s brought to her attention that she comes across as hating women because she has never hired one for her writers’ room, her producer (Denis O’Hare) opens up submissions from women of all levels and finds Molly (Kaling), a plucky efficiency expert at a small-town Pennsylvania chemical plant.

When Molly shows up the first day, she realizes she’s the only woman and the only person of color on the staff, so of course, the men she works with see her as merely a diversity hire. (As one co-worker bemoans, “I wish I was a woman of color so I can get any job I want.”) Katherine herself isn’t too happy with her new hire, but with the prospect of having her show taken from her, she allows herself to invest in new ideas brought forth by Molly. Just as Katherine starts to create a renaissance for her show, news breaks that could ruin everything that she’s built both professionally and personally.

Director Nisha Ganatra (a TV vet who also directed the lesbian indie classic “Chutney Popcorn”) has a natural way of bringing out each character’s inner layers. While Katherine is outwardly tough, a demeanor no doubt developed in the process of being the only woman in a male-dominated industry, there’s an inner vulnerability that emerges thanks to both Ganatra’s eye and Thompson’s stellar performance. It raises the question of why Thompson isn’t leading more comedies, more rom-coms, more films in general because she is an absolute delight from beginning to end.

Ganatra casts a similar eye on Kaling’s performance; her direction allows Molly to be spunky and naive, yet intelligent and fierce while being peppered with Kaling’s own pensive, poised, hilarious personality. Ganatra, Kaling and Thompson effortlessly bring two very different women to life in ways who are both complex and so different from one another, yet as a woman, I could see pieces of myself and other women I knew in both. It sounds easy to do, but it rarely comes together so seamlessly.

Rom-coms rely heavily on how an audience can believe and get lost in the story. Everything in “Late Night” from the costumes to the production design and cinematography creates a New York City where dreams can come true — but not without some garbage and misfires along the way. It’s not as glamorous as the NYC of “Sex and the City,” but instead, a bit dialed down and more rooted in reality. For example, Molly lives with an aunt deep in Queens, in a bedroom that looks like it was just inherited from a teen girl. But as a new writer with no previous experience, who certainly earns the least among her coworkers, it makes perfect sense (except maybe by Hollywood-movie logic) that this would be the housing that she could afford.

Her digs underscore the fact that this is a woman who is different than her peers: While the white men she works with have apartments near or around the show, Molly lives with family, making do with what she has and working even harder just to make her co-workers look at her with an ounce of respect.

Kaling qualifies as an expert at writing romantic comedies after five seasons of “The Mindy Project.” But the romance in “Late Night” isn’t girl-meets-boy; it’s girl-meets-career. It takes a level of authenticity in the writing to spin a genre successfully, and while male characters have always been able to show a devotion to being career-minded, Kaling understands that women are rarely given the same regard. That’s one of the many twists that makes “Late Night” stand out. This is a rom-com about being in love with your work life, and having the passion and drive to pursue it.

You can hear the thud when a writer feels the need to spell out the message of the film via a quippy line or two, and that’s one of the small drawbacks of the film. Even when I found myself aggressively agreeing with some of Molly’s dialogue, there were a few moments where what was being said was too on-the-nose for a film this intelligent. But it’s a small price to pay to watch some pretty amazing women at work on “Late Night.”