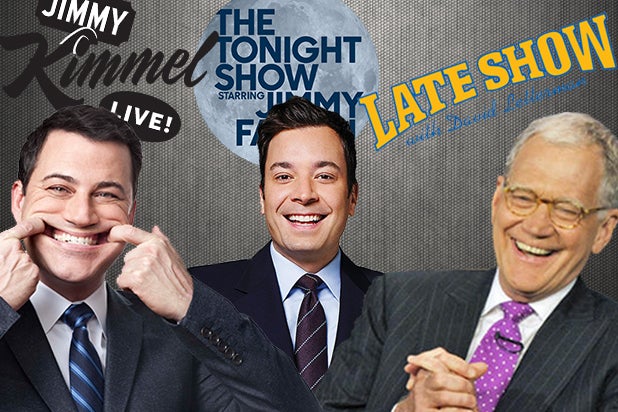 Those who have been expecting Jimmy Fallon to flame-out in the new late night wars might want to pull up a chair, either because it could either be a long wait, or it’s time to join the majority party and watch the new “Tonight Show.”

The passing of the torch from Jay Leno to Fallon has not only kept “The Tonight Show” in first place, it has strongly extended its lead over the broadcast competition. Of course, the big gains at 11:35 p.m. on NBC this season are partially skewed from the inclusion of Leno’s strong farewell episodes and Fallon’s historic February debut shows.

But an analysis of the May sweep also shows strong gains year-to-year for “Tonight,” including a 48 percent jump in the advertiser-sought 18-49 demographic rating.

David Letterman‘s “Late Show” has dipped in both ratings and viewers throughout the season-to-date and during May sweep. Almost certainly the late-night legend has lost some viewers to the younger-skewing “Tonight Show Starring Jimmy Fallon” and “Jimmy Kimmel Live.”

CBS hopes that trend will turn around next year when Stephen Colbert takes over.

Speaking of Kimmel, his show has seen double-digit percentage gains season-over-season, though this year is his first full season at 11:35 p.m.

In the May sweep, Kimmel earned more eyeballs but saw a ratings dip in the demo.

The late-night broadcast network shows should still air mostly originals through the summer, resulting in a new 52-week study to be released in September.

Here are the comparisons for both season-over-season to-date and during the May sweep period: