ABC has picked up the family drama “Promised Land” to series, the network announced on Wednesday.

The project, which was among the network’s last remaining pilots in contention from last season, comes from writer Matt Lopez and is described as an “epic, generation-spanning drama about two Latinx families vying for wealth and power in California’s Sonoma Valley.” 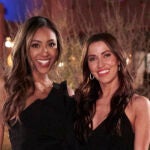 ABC previously picked up four new series, with a “Wonder Years” reboot and the musical drama “Queens” set to premiere this fall. The mockumentary “Abbott Elementary” and the Rebecca Rittenhouse-led “Maggie” are set to debut at midseason.