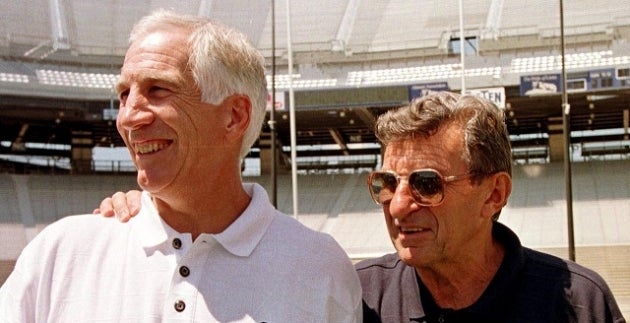 The network aired filmmaker John Ziegler's phone calls with the reviled former Penn State assistant coach a week after CNN staffers were accused of sympathizing with the 16-year-olds convicted in the Steubenville, Ohio, rape case.

Trying to avoid similar criticisms, Matt Lauer held a sometimes contentious interview with Ziegler, a former sportcaster and conservative talk show host. So NBC's position amounted to this: The interviews were newsworthy enough to play on "Today," but not without a grilling for the man who conducted them.

On the one hand, "Today" could be seen as putting an interview with a child molester in its proper context. Or the show could be seen as trying to have it both ways, by hyping the interview for ratings even as it cast doubt on its believabilty.

Story continues after the video:

Sandusky was accused of raping a child in the shower, among other offenses, and in the most noteworthy part of the interview, Sandusky questioned how the main witness to the alleged assault could have believed that what he heard was sex.

"I don't understand how anybody would have walked into that locker room from where he was and heard sounds and associated that with sex going on," Sandusky said, laughing. "You know, like he said that could've been. … That would have been the last thing I would have thought about. I would have thought maybe fooling around or something like that."

Ziegler interviewed Sandusky for a film he is working on that will claim Penn State coach Joe Paterno was framed by the news media. Paterno was fired after he was accused of turning a blind eye to evidence against Sandusky, including the witness' account of the shower incident.

Ziegler has a history of being fired over what he considers political correctness run amok.

He was fired from two different radio stations for using the N-word on the air and fired from a television sportscasting job after opining that O.J. Simpson was guilty of murder. In an interview with the late David Foster Wallace, he imagined killing a former boss.

Lauer pressed Ziegler on whether he believed Sandusky was guilty. Ziegler first argued that he is trying to give Paterno "effectively, his day in court," which he never received because he died of complications from lung cancer in January 2012, two months after his firing.

Under repeated questioning from Lauer, Ziegler said he believed Sandusky was guilty of "many of the things if not all of the things that he was accused of." But he believes Paterno was unfairly dragged down with him.

Ziegler has previously written that the initial case against Sandusky was "incredibly weak," and he played down the shower-rape allegation, saying he believed it was "a botched 'grooming.'"

Lauer failed to press him on those statements. ("Grooming" refers to the practice, among child molesters, of finding and preparing potential victims.)

No one involved in the case seems to welcome Ziegler's involvement. Attorney for the victims, including the boy in the shower, said in a statement to "Today" that they have "heard enough from Jerry Sandusky."

Even Paterno's family says no thanks to Ziegler's attempt to clear his name. They said in a statement that they had "no role in obtaining or releasing" the interview and that they believed that "any attempt to use this recording as a defense of Joe Paterno is misguided and inappropriate."