On Monday night, Fox News’ Laura Ingraham responded to Kate McKinnon’s impersonation of her on “Saturday Night Live” this past weekend — by trying to impersonate McKinnon.

“Now, there’s reason I like Kate McKinnon. I have so much respect for her as a talent. She’s so evenhanded in her political commentary, but seriously, think of all the low-hanging fruit provided by Joe Biden and Nancy Pelosi, little Petey B. and the Squad on a near-daily basis. I mean, I think this is kind of comedy gold, don’t you?” said Ingraham sarcastically, mimicking the tone McKinnon took when pretending to be her.

During the comedy show’s cold open last Saturday, McKinnon played an over-the-top version of the Fox News primetime star. As Ingraham, the comedian said, “Inflation’s out of control, gas is at $19 a gallon and the green M&M has been canceled just for being a whore,” said the parody version of Ingraham. “Things are so bad in Biden’s America, even according to former Wendy’s spokesgirl Jen Psaki.” 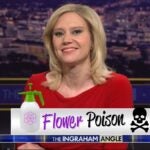 Ingraham said she had “fun” being impersonated, but sarcastically hit McKinnon for never mocking “the other side.” Ingraham even said she would stop by the NBC set to impersonate House Speaker Nancy Pelosi for free.

The “Ingraham Angle” host has joked around on her show before, once memorably doing a “Who’s on First”-esque bit that referenced the Netflix hit “You.” Other Fox News stars have also been lampooned on “SNL.” Steve Doocy and his “Fox & Friends” co-hosts were spoofed in 2018, which he recently assured TheWrap he found flattering.

“It was funny and they did it for a while and it’s just flattering,” Doocy said. “They’re not going to do a cold open with people that nobody’s ever heard of.”