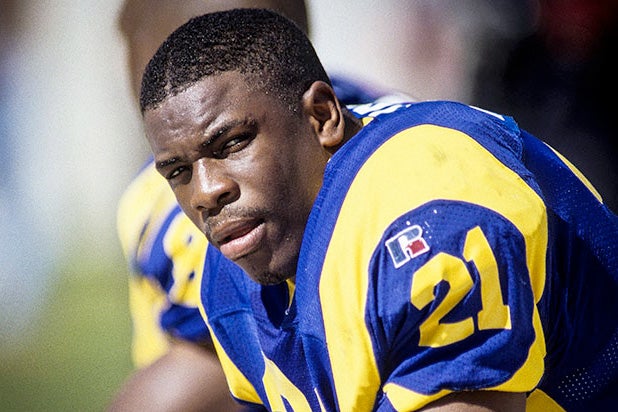 Lawrence Phillips, a star running back and Heisman Trophy contender at the University of Nebraska during the 1990s, died in prison Wednesday in a suspected suicide. He was 40.

Phillips was found in his prison cell at California’s Kern Valley State Prison, where he had been serving a 31-year, four-month sentence for inflicting great bodily injury involving domestic violence, corporal injury to a spouse, false imprisonment and vehicle theft.

He was sentenced to prison in 2009 for two separate incidents: assaulting an ex-girlfriend and driving his car into three teenagers.

“The incident occurred at 12:05 a.m. Wednesday, Jan. 13, when staff conducting security checks found Phillips … unresponsive in his cell. He was transported to an outside hospital where he was pronounced deceased at 1:27 a.m.,” the California Department of Corrections and Rehabilitation said in a statement.

“Phillips had been in an Administrative Segregation Unit on single-cell status since April 11, 2015, after he was suspected of killing his cellmate. Phillips was currently in the early stages of the criminal case in Kern County for the homicide.”

A Los Angeles high school football star, Phillips arrived at Nebraska in 1993 and quickly became a key part of the Cornhuskers’ dominant offense. As a sophomore, he was the star running back on the squad that won the 1994 National Championship, and he became a leading Heisman Trophy candidate in his junior year, when Nebraska repeated as National Champions.

But his college career was marred by multiple arrests for assault, and Phillips turned pro after three seasons.

He was drafted No. 6 overall by the St. Louis Rams in the 1996 NFL Draft after teams with higher picks declined to select him due to his off-field problems. But, as his legal troubles mounted, his career failed to take off through stints with several teams in the NFL and other professional leagues.

He last played with the Calgary Stampeders of the Canadian Football League in 2003.