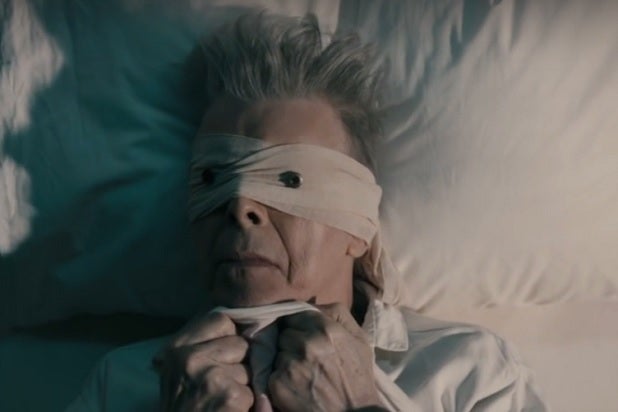 When David Bowie died Sunday, he left behind a video that hauntingly foreshadowing his demise.

“Lazarus,” named for the Biblical figure who rose from the dead, depicts the singer in what appears to be a hospital bed, a bandage wrapped across his eyes.

As the video unfolds, Bowie briefly levitates, and is later depicted trembling with his arms outstretched.

Lazarus is also the title of an off- Broadway production for which Bowie wrote the score.

At the end of the video, a twitching Bowie retreats backward into a wardrobe chest as if it were a  tomb.

If the visual clues weren’t enough, the opening lyrics of the song are, “Look up here, I’m in heaven/I’ve got scars that can’t be seen.” The lyrics conclude, “Oh I’ll be free. Just like that bluebird. Oh I’ll be free. Ain’t that just like me.”

The video was released on Jan. 7, just days before his death.

Bowie died just days after his 69th birthday, after an 18-month battle with cancer.