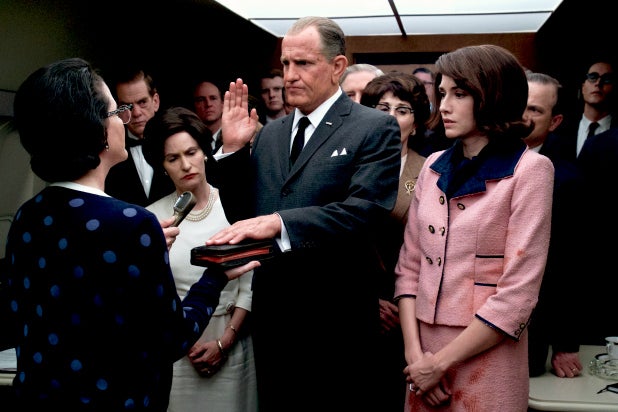 Reading Robert A. Caro’s magisterial and minutely drawn Lyndon B. Johnson biographies — four so far, and counting — it’s not difficult to see how captivating the Texas-born giant of politics would be as a screen character. A physically imposing tornado of purpose, means, crassness and cunning, Johnson would be a feast for any actor, any screenwriter, and any director who relishes serving slabs of grandiosity with a dash of folksy humor, all in the service of a story about one of the most momentous eras in American history.

And Rob Reiner’s “LBJ” is an often pedestrian, sometimes punchy, well-acted biopic that gives the mightily capable Woody Harrelson the reins of the country’s 36th commander in chief.

Can a movie be made more enjoyable simply by when it’s released? In the case of “LBJ,” that may be so, because Johnson’s a fascinating historical figure to revisit in our current moment of Washington, D.C., turmoil about leadership ability, national discontent and disturbingly reinvigorated racial politics. Johnson, after all, was a Southern politician who went from legislative lion in the Senate by the end of the 1950s to neutered vice president under Kennedy, to presidential hero (unless you were racist) for hammering through the Civil Rights Act.

That law’s passage was a feat of political will that took all of Johnson’s considerable deal-making powers. Though it pushed the country forward, it also, as he is said to have told a Democratic aide, “lost the South [for Democrats] for a generation.”

“LBJ” isn’t solely about his presidency, though. The screenplay by Joey Hartstone (“The Good Fight”) covers a span of time from Johnson’s failed bid for the Democratic presidential nomination in 1960 to his successful campaign to heal the nation after Kennedy’s assassination by taking on his predecessor’s mantle of civil rights legislation. In between, Johnson was forced to reconcile his ego and ambitions with Washington realities: Johnson was the workhorse, Kennedy was the show horse.

Though Johnson understood as much as anybody that “power is where power goes,” the need to be popular rattled him, and as hard as he tried to make the vice presidency a source of power, in the Kennedy Camelot he was more caged beast — tolerated by Jack (Jeffrey Donovan) and hated by attorney general Bobby (Michael Stahl-David, “Narcos”) — than welcome knight.

Watch Video: What If America's Great Presidents Were Women - 5 Actresses Imagine It

The events of November 22, 1963, would change all that, of course, and “LBJ” uses the tension-filled transition of power that day, from the arrival at Love Field to the swearing-in on Air Force One, to fracture the narrative. It’s an unnecessary device, though, and one senses it’s there to energize what amounts to a talky story of clashing personalities and backroom manipulation.

But those conversations have a fair amount of spark already, whether it’s LBJ barking out strategy to his staff (famously from the toilet in one scene), massaging his relationship with openly hostile Bobby, or feeling out his racist mentor in the senate, Georgia’s Richard Russell (a fine Richard Jenkins) regarding a fairer nation for blacks. (In one great exchange over a private dinner served by a black employee, Russell leans in to defend his stance as “preserving a way of life,” to which Johnson slyly retorts, “Then why are we whispering?”)

Whether Reiner is the best director for this material is a case not easily answered by “LBJ.” His way with crafty mainstream entertainment sorely diminished by his output over the last couple of decades, he’s nevertheless an active Hollywood liberal who made the patriotism-as-charm-offensive rom-com “The American President.” Here, he’s more like an efficient ride operator, unconcerned about the clankiness of the machinery but certain you’ll enjoy the stuff that’s supposed to work.

Harrelson is, however, his own wattage source here. If, like me, you sensed something overly calculated and clinical about Bryan Cranston’s lose-himself portrayal of LBJ in HBO’s “All The Way,” you’ll invariably find Harrelson’s Johnson more organically pleasurable in its bluster. A wonderful actor well-versed in finding the ornery, laugh-inducing appeal in brutes, Harrelson overcomes some unfortunate makeup choices to get at what was both nakedly vulnerable — especially in the quietly effective scenes with wife Lady Bird (a perfectly cast Jennifer Jason Leigh) — and charismatically commanding about Johnson’s bull-in-a-china-shop presence.

At the core of Harrelson’s Johnson is a born fighter who could bide his time, absorb bottomless animosity, and take charge when the opportunity presented itself. Perhaps a more cleanly hagiographic, epically told film biopic would have flattened out the compelling contradictions in Johnson.

“LBJ” is artless, for sure, but like an old boxing picture, it relishes both the battles and the wound-licking, and unlike the endless scraps and scrapes in today’s political headlines, the man at the center of those conflicts won some real triumphs.