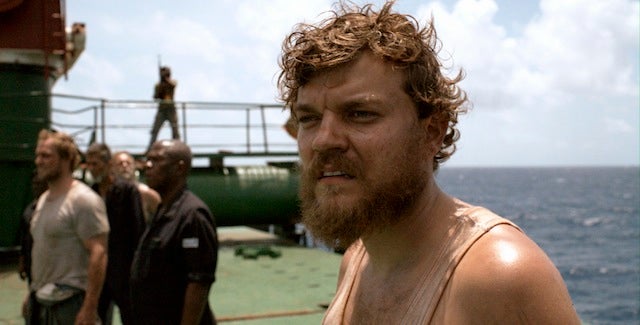 This tense drama is an accomplished contemporary take on adventure at the high seas, but rather than Errol Flynn brandishing a sword and yelling, “Ahoy, matey!,” “A Hijacking” follows what happens when Somali pirates take over a cargo ship in the Indian Ocean.

The Danish film is more of a psychological drama than an action-filled tale though the pirates all tote automatic weapons. What action there is mostly takes place on fax and telephone lines and in a conference room in Copenhagen as Peter Ludvigsen (Soren Malling), the CEO of the Danish shipping company that owns the boat, wrangles with Omar (Abdihakin Asgar), the negotiator for the Somali pirates, over how many millions the company will pay for the release of the ship’s small crew.

These negotiations drag on for months. That a ransom will be paid is never in question: what's in dispute is how much, with the pirates and the shipping company far apart in agreeing on a figure at the start.

As numbers are tossed back and forth, the crew of the ship, the MZ Rozen (the writer of this review was neither prejudiced for, or against, the movie because of sharing the ship’s moniker), find themselves pawns in a game over which they have absolutely no input or control. One of the film’s primary characters, Mikkel Hartmann (Pilou Asbaek), the ship’s cook, struggles to maintain his psychological equilibrium and health as conditions aboard the ship deteriorate.

What the movie makes clear is that, even though the lives of the hostages are at stake, this is a business for both the Somali pirates and the companies that own the ships that are their targets. It’s a complicated game of give and take that's all about dollars. There are rules in place, consultants to be hired, and a complicated etiquette that everyone follows when a ship is hijacked.

While taking an almost documentary-like approach to his material, director-writer Tobias Lindholm (“R”) still manages to plumb the emotional depths of his major characters, the CEO and the cook. His biggest achievement, though, is managing to convey the concomitant tenseness and tedium of a prolonged hijacking for those on board the vessel.

If there’s a flaw in “A Hijacking,” it’s that the Somali pirates are little more than stick figures. Other than Omar, who views himself as a mere negotiator for hire, the pirates mostly stand around with guns drawn, alternately threatening and joking with the hostages and complaining to Mikkel about his cooking.

If nothing else, “A Hijacking” serves as an accomplished appetizer before director Paul Greengrass' hijack drama, “Captain Phillips,” arrives in October. That’s the Hollywood studio film starring Tom Hanks about the real-life hijacking of an American ship in 2009 by Somali pirates.