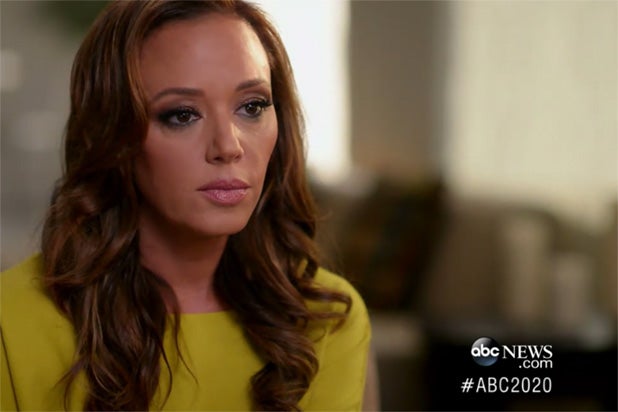 Since leaving the Church of Scientology in 2013, Leah Remini has not been shy about her criticism of the new-age religion.

That includes her new tell-all memoir “Troublmaker: Surviving Hollywood and Scientology,” and a recent “20/20” interview recounting her time as a member of the church.

From her run-ins with high-ranking church members such as Tom Cruise and David Miscavige, to her dramatic exit and outspoken criticism of the church, Remini outlined her entire relationship with Scientology for ABC News in an interview that aired Friday. The most shocking details:

1. She was punished for letting a boy touch her breasts as a teenager

Remini signed the billion-year contract to join Scientology’s religious order, the Sea Org, as a teenager. She and her family moved to the church’s spiritual headquarters in Clearwater, Florida, known as the Flag Land Base, where she says they lived in a run-down, “roach-invested” former motel.

When she and her sister began getting involved with boys, they were punished by the church. In the interview, Remini said that she was put into the “Rehabilitation Project Force” for letting her boyfriend touch her breasts over her shirt.

“When you have screwed up royally in the Sea Org, it’s basically to reform you,” she said. “You have to wear black. You have to run everywhere you go. You have to call everyone ‘sir.’ … So it’s pretty severe punishment for an adult, not to mention a child.”

Also Read: Leah Remini: Scientology Wrote Me Up for Telling Tom Cruise, Katie Holmes to 'Get a Room' (Video)

2. Remini was punished for telling Tom Cruise and Katie Holmes to “get a room”

As Remini’s celebrity began to rise, the “King of Queens” star said she got closer and closer to the church’s high-ranking members, including Tom Cruise and then-girlfriend Katie Holmes.

But when she was invited over to teach the couple how to dance salsa, her outspoken nature got her into trouble when she was critical of Cruise’s behavior. “He was, like, forcibly kissing Katie,” Remini remembered. “I said, ‘Hey, get a friggin’ room.'”

3. The church may have tried to convert Jennifer Lopez

When Remini was invited to Cruise and Holmes’ wedding in 2006, it came with the request that she bring along her friends Jennifer Lopez and Mark Anthony.

At the wedding, Remini said she started to have doubts about the church’s leadership when they tried to distance her from her famous friends.

“They were always trying to extract me,” she said, revealing that the church had them travel in separate cars and sat them at different tables. “I could only assume because they wanted to make Jennifer a Scientologist and maybe I was barring that road for them.”

Also Read: Paul Haggis Blasts Media for Not Grilling Tom Cruise on Scientology: 'Shame on You'

4. After the wedding, Remini embarked on “a mission to save Scientology” from its leaders

Remini, a self-identified troublemaker, filed “knowledge reports” complaining about the behavior of the church’s high-ranking members, including Cruise and Scientology leader David Miscavige, in attempts to save the church from people she believed to be impeding its mission.

“I thought, ‘I now see where the cracks are in our Church, and it’s David Miscavige, it’s Tom Cruise,‘” she said. “They were bringing down Scientology.”

Remini was especially concerned that no one would answer her questions about the whereabouts of Miscavige’s wife, Shelly, who disappeared from public view in 2007 and has been the subject of much speculation since. “It’s such a simple thing. It’s a big wedding that the leader of the Church is here and his wife isn’t. It’s getting weirder because you’re making it weirder,” she said.

5. Katie Holmes may have filed her own knowledge report about Remini

After Remini started speaking up with criticism of the church, Remini said she was targeted by other members, including Holmes.

“It starts with, ‘I was dismayed at the behavior of Leah Remini during the events leading up to our wedding … At the wedding, the behavior as a guest, a friend … was very upsetting,'” Remini said, reading from a Knowledge Report she claimed was written by the actress.

Remini was sent to a Florida Scientology facility where she said she was admonished and coerced into apologizing for her behavior.

“I regret having upset Leah in the past and wish her only the best in the future,” Holmes said in a statement to ABC News.